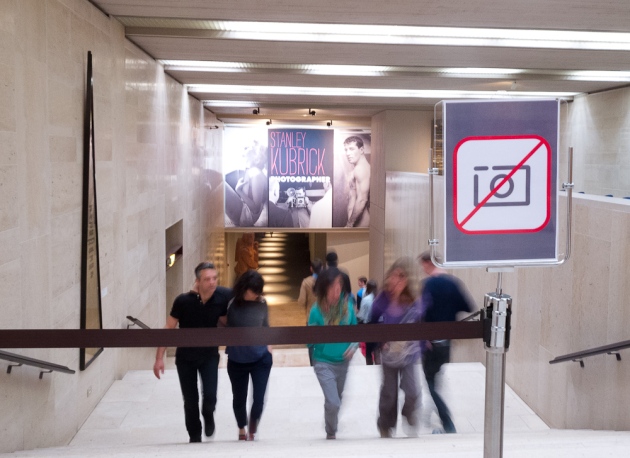 One wondered what the still photographs of a well known movie maker would be like. Were they being shown for their own merit or simply because they were the work of a leading film director. It is not easy to answer this question directly, the exhibition was probably financially viable because his name was big enough to bring in a large enough audience, yet Kubrick did start out as a still photographer and his excellently executed photographs are a good record of the New York of his time. However, I got the impression that the images were on show more for their content than their style of execution.

A film after all is nothing more than a succession of images and so if one can master the still photograph, one is surely well on the way to making good films.

I have perhaps seen only one of his films since I am not a film goer. This was one of his more controversial films called Clockwork Orange which is about extreme violence, sadistic in nature, violence for the sale of violence. Like most of Stanley Kubrick’s films, it is based on a novel, in this case Clockwork Orange by Anthony Burgess written in the late 1960’s.

Perhaps the most well known of his films is 2001: A Space Odyssey which was based on a book by Arthur C. Clarke and featured a good musical score; I have not seen more than a few minutes of it.

Stanley Kubrick was influenced by the work of other photographers of whom two are mentioned. The first is Weegee who wrote that “The art of the photographer is to show how, in a city of ten million inhabitants, people live in total solitude.” The other photographer to be mentioned is Walke Evans who wanted to make pictures with “content, authority and quality.”

The documentary photographs of New York are certainly interesting although one can be forgiven for not knowing who some of the characters are. Montgomery Clift may have been a great star of his time but who remembers him now? Yet Kubrick also documented the unknown such as a young boy who worked as a boot shiner and also as a deliverer of laundry. Another series of photos takes us into the world of the circus.

He used a portable handheld 5 by 4 camera to make images that rendered fine detail. Some of his photographs of people boxing such as that of two young boys hitting each other, are remarkable not just for their subject matter but also for their technical excellence.

One interesting feature of this exhibition is that the individual photographic prints have no captions; groups of photographs are however mentioned.

Other subjects illustrated include animals in a zoo.

Kubrick was fascinated by the act of looking as evident from his last film “Eyes Wide Shut”. This film  concerned with voyeurism drew inspiration from the Traumnovelle of Arthur Schnitzler.

Perhaps it his portraits that make Kubrick noteworthy as a photographer. He photographed the rich and famous among others; his debutantes of the 1950’s are on show yet we are not told the names of these people. It seems the viewer is being asked to appreciate the photographs for what they are in themselves while captions with names might have detracted from this experience. One photograph of a woman seated in the centre of the image with fruit around her and the presence of an attentive man of whose body we see barely half, sees her unpeeling a banana; the sexuality of the symbolism here is obvious but what statement is it making? Perhaps it is meant to be a joke!