After coffee, we went back to the Open Eye gallery to see another exhibition upstairs in the Archive Gallery. this time, another OCA tutor, Keith W Roberts, introduced the work to us since he is presently working on a Ph D about Hardman, focusing not on his landscape work visible in the gallery but the thousands upon thousands of portraits that Hardman made.

Keith gave us a brief introduction to Hardman, a photographer who worked in Liverpool during the middle of the twentieth century, and whose house in Rodney Street is preserved as a working studio by the National Trust; the Trust’s information says … “Explore the contrasting sides of this house: the neat, professional, spacious business rooms and the cluttered, cramped living quarters of the renowned portrait photographer Edward Chambré Hardman and his wife Margaret. They lived and worked here for 40 years, keeping everything and changing nothing. The business focused on professional studio portraits but their real love was for vivid landscape images. Some of their huge collection of photographs is on display in the house, along with the equipment they used to take and develop the iconic images.”

Hardman seems to have been quite an astute individual and was a Fellow of the Royal Photographic Society; Keith hands us a copy of a talk delivered by Hardman about obtaining “Exhibition Quality” prints which seems a bit ironic since I am not the only one to find the prints on show as somewhat lacklustre; there are no bright highlights for instance rather a certain dullness pervades. Hardman recognised Alvin Langford Coburn as an influence and there is a similarity in style but at the time Hardman was working the technology of photography had increased in quality allowing Ansel Adams to make prints of much better quality. In his article, Hardman quotes a photographer called Ward Muir who encouraged photographers to “make your photographs sing!” and although the compositions of these images are pleasant, the photographs do not personally inspire me.

In his article, Hardman writes about pictorialism and points out that “Some critics – those belong to the world of journalism – would have you believe that it is almost a crime to produce a pictorial photograph. The highest praise goes to semi-documentary photographs showing life and action – often a very slummy kind of life. One could sum it up as a glorification of the instantaneous moment. Composition, balance, lighting, tone rendering, definition and all the other things which we pictorialists strive after, do not seem to matter in the least. In fact, the photographer’s personality must not intrude. It is subject-interest only which counts.” (from The Photographic Journal, Volume XCV, 1955)

Peter Haveland talks to us about this exhibition. He considers the subject matter as unrepresentative of the age in which the photographs were made. Hardman photographs not what was there rather certain views that he wants to make a picture of. For instance, a hay rick is included as what would appear to be the subject of the photograph yet apparently Hardman made the image because of the cloud formation in the sky behind; there is a similar image of a copse on a hill where clouds engulf the small wood and spiral up into the sky. To emphasise his point, Peter remarks that these images were not made of the 1950’s but of another time, they are not honest representations. 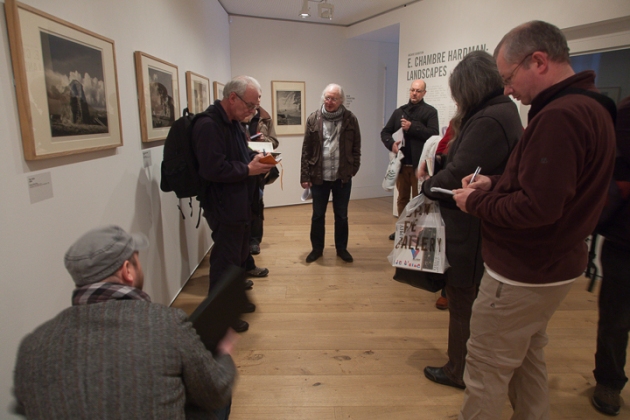 At this point, a woman storms through our group towards the exit exclaiming, “You don’t know what you are talking about! I knew Hardman, he was a friend, and I can assure you all his images were made by him in his time!” I call after her, suggesting she might like to join the debate but she replies that she has an appointment. She has misunderstood Peter by taking his remarks literally which is surely a mistake – if I took Peter that seriously, I would no longer be studying at the OCA but would have “exploded” and gone off on my own way. Peter has a reputation for challenging people!

For instance, Peter makes a reference to the Ansel Adams School of Anal Retentiveness which is amusing but not an easy pill to swallow. Personally, I feel I learnt a lot from the basics of the Zone System since it gives a grounding in the understanding of the photograph which many critics of the medium seem to lack. I can’t help that Hardman’s work would be a lot more appealing if he had understood Ansel Adams a bit more. However, we live in an age where the screen is taking over from the print and although the latter is not redundant, most photographs are viewed on screens.

The fact is though that we all photograph things to which we are attracted since photography is a selective process. Hence, the view expressed through our images is bound to be slanted and can never be total.

There is a good review of Hardman’s work to be found on the internet that was published in The Independent while a blog called That’s How the Light Gets In has accounts not just of this exhibition but also other work of Harman such as his book, Life through a lens.

One thought on “Landscapes by Edward Chambre-Hardman”