I had suggested to Eileen, leading a group of Open College of the Arts students in Paris, that I might offer an Atget walk; “Amano’s Atget Amble” was how I branded it, with the idea to visit places that Atget had featured in his photographs. One can still find them looking pretty much the same though on other occasions, development has taken over and there is little in the way of recognition between the two scenes, past and present.

Eileen agreed and I decided that Montmatre would be the best place to do this though I had not at that point found any of the locations and wondered if I would be actually able to locate more than a couple. However, Atget seems to have chosen fairly obvious locations to photograph and to my surprise I was able to find all five Montmatre locations that appear in Bernice Abbott’s collection of his photographs entitled, “ATGET: Photographer of Paris“, that was published as a photobook in 1930.

We started the walk in the early evening by which time the multitude of tourists that flock there during the day had gone and we were able to move through the streets without obstruction. It was a slow but steady climb along from the Place de Clichy and then up the hill near from the Blanche Metro.

We met Rue Lepic and soon after Moulin de la Galette after which we arrived at the first Atget location,the place where he photographed a travelling salesman. This photograph seems slightly out of place with many other Atget photographs because normaly he did not do these kind of portrait location photographs. Interestingly however, Atget’s father whom Atget never really knew since he was orphaned when young, was like the man in this photograph, a door to door salesman. This location might have been difficult if not impossibe  to find but for a couple of ornate flowerpots on the columns of a house in the background of Atget’s photograph; they correspond exactly to the ones that still exist today though are there are obscured from Atget’s view owing to overhanging vegetation. The street has changed in character as one might expect and some building on the left of Atget’s image have gone.

We continued up Rue Lepic and then entered the Place du Tertre which means “a place on a hillock”. This particular square has been here for about 650 years and at first we stopped to see the popular view which includes the Place du Tertre with the Sacre-Coeur in the background. I came across three different postcards of this view as well as a painting. 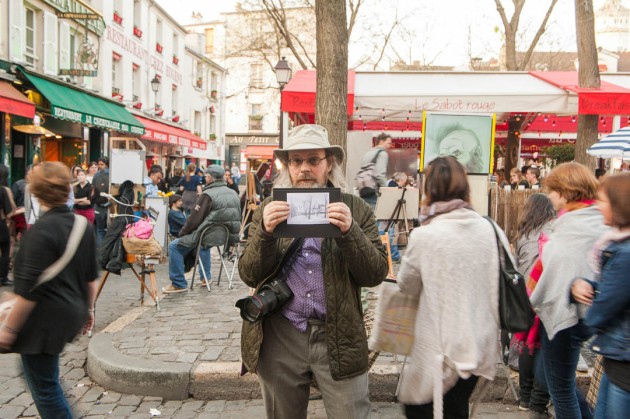 Atget however seems to have had a more documentary approach to his work and went for a view that encompassed all of the Place du Tertre without the distraction of the Sacre-Coeur in the background; one wonders where he might presently place his camera as a water tower built in the 1930’s now looms in the background. Of course, with the Place du Tertre becoming part of the tourist magnet that is Montmatre, Atget would find it hard to erect his tripod anywhere let alone frame a view of this ancient square presently festooned with the marquees of restaurants to say nothing of artisans lining the pavements and forbidding one to photograph either them or their art work. 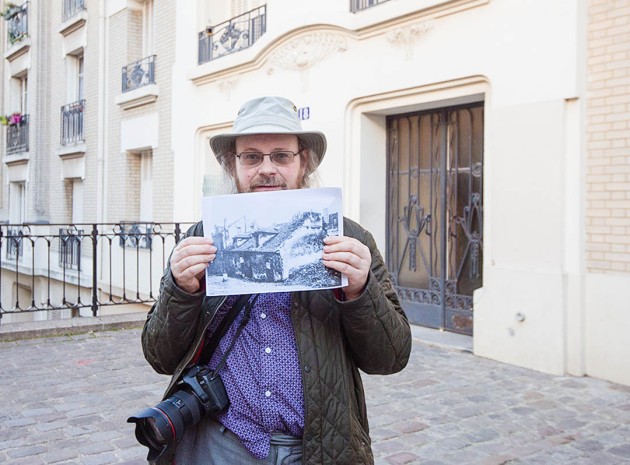 Our next stop was beyond the Place du Tertre where the water tower now stands, a colossus rising out of the Square Claude Charpentier. This area was redeveloped between the wars and so little chance of seeing the house that Atget photographed which in his time was looking dilapidated; perhaps this was the reason he made the picture since he knew the area would soon change. We were able to see where this building once stood as Atget noted it down on the original gelatin as 18, Rue de Mont Cenis; at number 18 nowadays, there is a 5 storey building on the front of which is some writing informing us that the building was erected in 1927. 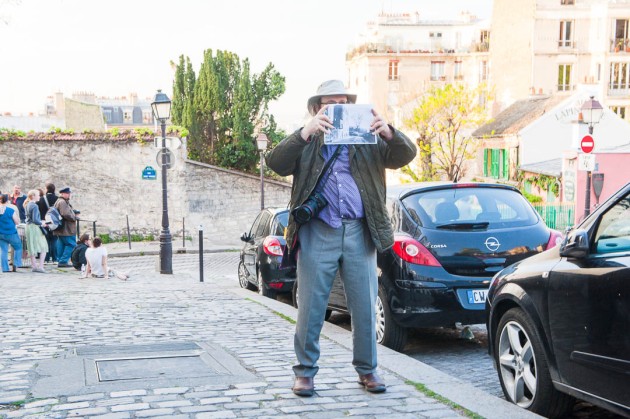 Our final destination was Rue des Saules. Henri Cartier-Bresson in his younger days had painted the top end of the street while Atget some years previously had photographed half way down where it meets the Rue Saint-Vincent making a T junction. The road has been widened and a wall removed, pavements extended while houses have come and gone although a  doorway from Atget’s photograph is still visible on the left; the wall at the end of the road however still stands and has not been altered since Atget’s day. The tree that grew behind it has gone to be replaced by another smaller one. It was not easy to see Atget’s point of view from here owing to the cars parked along the road.
Our walk ended yet we continued through Montmatre to our restaurant. I was however, back a few days later to see if I might find the final location included in Bernice Abbott’s selection. Atget was not someone who tried to hide his tracks and it was not long before I found myself in front of La Bonne Franquette, a cafe with an obvious history displayed on a placard outside. In Atget’s day it was known as Le Franc Buveur yet one can still recognise it as the same place owing to the layout of the door and windows along with the incline of the street. Artists who came here included Van Gogh, Degas, Renoir, Monet, Cezanne, Toulouse-Lautrec and of course, Eugene Atget, though one might well wonder what the reaction would have been had anyone from those times referred to Atget as an artist.

Another Atget subject; a cafe where famous artists once met

Revisiting Atget’s locations is fascinating as it peels away levels of history and one starts to see the way in which Montmatre has changed and not changed over the years. It also gives an insight into the way this photographer worked while going about his business making “Documents for Artists.” He remained virtually unknown during his lifetime but is now heralded as a Surrealist and one of the greatest photographers of the Twentieth Century.