Thanks to Sunil Perera, son of my cousin Jane, I managed to get a ticket for what might be described as a pop art installation, a small theme park, a parody of Disneyland, on the Somerset coast in Weston-Super-Mare in the United Kingdom. This exhibition has received a lot of media attention and tickets have not been easy to acquire owing to the internet site being overloaded. One approached with a sense of trepidation; what exactly was Dismaland all about?

What follows is my personal experience and observations; another report can be found in The Guardian HERE

Although we had prebooked tickets, it was necessary to queue for about 20 minutes as we slowly filed our way in. There were people queuing for tickets on the door although these were apparently all sold out for the day and with warnings that tickets bought from other websites would not be accepted, one started to feel a certain dismalness even before entering. As we passed through the security gates (Caroline the daughter of my cousin Ralph had stepped in at the last moment to accompany me) we were told not to laugh which of course made us giggle resulting in usagain being told to stop laughing; one started to get a feel for the deep sense of irony that accompanies this installation.
Conceptual art Is not everyone’s cup of tea. Unless you understand the concept it is unlikely to be comprehensible or even likeable. Banksy, the central artist of this show, makes graphic art that gets a message across but it is not art of the kind a painter like Constable creates. One might say they are opposites for Constable showed very little political awareness in his work while the political message here is prominent; a piece of graffiti on the side of the Cinderella castle reads “Unfuck the system” which might be merely humorous to some yet does actually contain the germ of an intelligent viewpoint which seems to pan out over Dismaland.

We started by looking at the Cinderella castle which looked decidedly run down; a long queue at the entrance to this exhibit deterred us from entering. We did later on in the course of our three hour visit and saw the crashed royal carriage with a dead princess hanging out of the carriage window while nearby a bank of photographers take photographs of the accident, their flashes firing continually. The reference to the death of Lady Diana is obvious and this seems an appropriate way to remember her death. As one leaves the castle, one can purchase a photograph of the scene from one of many; I find this is an interesting comment on the state of press photography today and the medium as a whole perhaps to say nothing of the homage being paid to the late princess. I can imagine some people finding this offensive but not as to why.

The crashed carriage of the Princess surrounded by Paparazzi

At first we don’t really know what to make of the Dismaland spectacle we see. It is clearly the work of genuine artists whose satire has something to say beyond merely poking a stick at the society we live in. After a refreshing drink, we start to walk around the exhibits and spend sometime looking at the videos. There is one that catches my eye of giraffes entering an Olympic size swimming pool in what is an excellently animated footage. One might wonder where they are actually going as they walk through a labyrinth of tiled passage ways; then they emerge onto a high diving board, proceeding to jump acrobatically off to pirouette into the water below. They manage it all very gracefully yet the irony is perhaps that giraffes can’t swim!

The Sleep of Reason tent

We enter one tent called The Sleep of Reason. The name recalls the Surrealist artist Magritte and the darkened interior houses a unicorn in formalyhide, the unicorn being a donkey with a spike attached to its’ forehead, another creation of Damien Hirst, an artist so successful that people would appear to hate him for it. There are exhibits by different artists here such as Ronit Baranga from Israel who says of the crockery she exhibits, “It’s as if the beasts have been invited to feast but the plates are planning a feast of their own”. 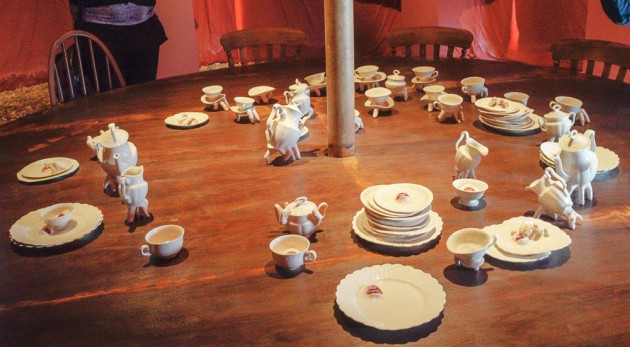 crockery with a life of it’s own

The exhibit, art work, that interests me most is of a woman sitting on a park bench; one can see little of the woman other than her skirt and stockinged legs for she is under attack by seagulls who obscure her upper torso while one hovers above her and another sits on the bench beside her. There is room on the bench for one to sit there also and have one’s photo taken if one likes while a member of the Dismaland staff is nearby looking appropriately dismal. 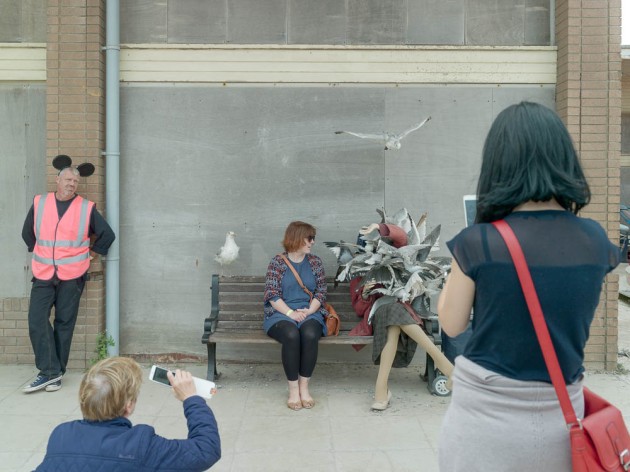 We buy lunch in the form of vegan wraps. The young woman serving us is bubbly and I comment on the fact she seems to be smiling and might be reported to Dismaland for that. She smiles and remarks that she is not an employee of Dismaland! I don’t pursue the matter but joking about being dismal seems to be part of the experience of being here. Paul sends me a text asking if I am dismal, I leave a phone message for a friend in an appropriately dismal tone and Caroline assures me she is feeling dismal.

Punch and Judy show at Dismaland

A Punch and Judy show runs nearby with visitors sitting in deckchairs to watch or simply standing nearby. This is a Punch and Judy show with a contemporary perspective evident in references to abuse, wife beating and the like. Punch is no longer the funny man who can get away a with beating his wife and finds himself placed in an historical as well as a social context.
We manage to see most of what is on show although we don’t for instance try to knock over an anvil with a ping pong ball which is one of the side shows or even take a ride in a caravan that swivels around. I would like to have listened to all the Punch and Judy show as well as seen more videos but after 3 hours of Dismaland, the reality of the message starts to become just a little too clear and I sense a feeling of nausea. There are those who consider the humour tasteless, I am not one of them, yet there is a sense of nihilism here that is not easy to shake off. Perhaps I need to visit again to get a better sense of what it is all about and spend sometime in the library set up in another caravan. Dismaland seems to be suggesting a better kind of life, a speaker reminding us at one point that “ambition is as dangerous as complacency” while a sign announces that “winning is prohibited”.

The gift shop is rather bare. None of the carpeted floors and piped music one often encounters in such places and there is not much on sale. I only want a copy of the catalogue to help remind me of what I have seen and tell me what I have missed. Riot shields with a smiley on the front have sold out.
The next day I visit London and as I get off the train, the sound of a siren greets me, taking me back to an exhibit at Dismaland in which there is a model of a city. All the cars seem to be either police or other members from the emergency services and blue lights flash constantly to the sound of sirens. Dismaland gives one a chance to see contemporary life from a detached perspective.

2 thoughts on “Dismaland: a pop art installation in Weston-Super-Mare”