There seems to be a lot of interest in Japanese photography and yet not a lot of coverage. Japan has produced and continues to produce a lot of photobooks yet these can inflate in price considerably if not bought when they are published. Even a small book of writings by Japanese photographers  has multiplied in price since I bought it; what cost me £16.50 a few years now sells for £140 while second hand prices are over the £300 mark. 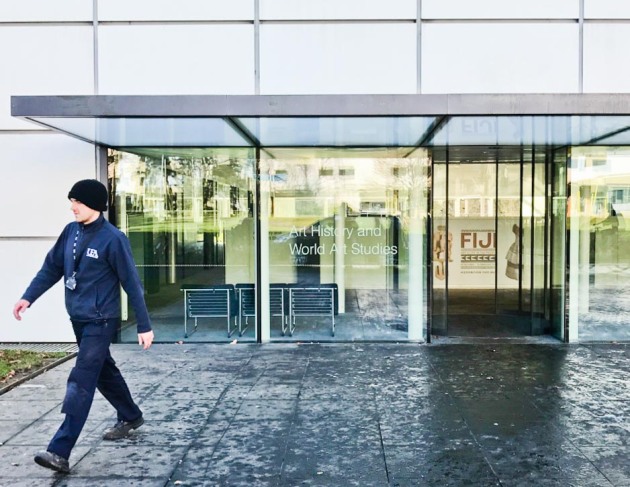 Although the morning is sunny and fresh in North Norfolk, my friends and I drive down to Norwich to see this exhibition of Japanese master photographers at the UAE Sainsbury Centre. It is important for me and the reason I have come to East Anglia. I do some research beforehand and yet am surprised on entry to see a lot of smartly printed colour photographs, flowers by Nobuyoshi Araki; I was expecting gritty black and white imagery often with distinctly out of focus areas and not a lot of tone in the prints along with a lack of formal composition. Yet Japanese photography has changed since the 1960’s and 70’s although these photographers were working at that time. 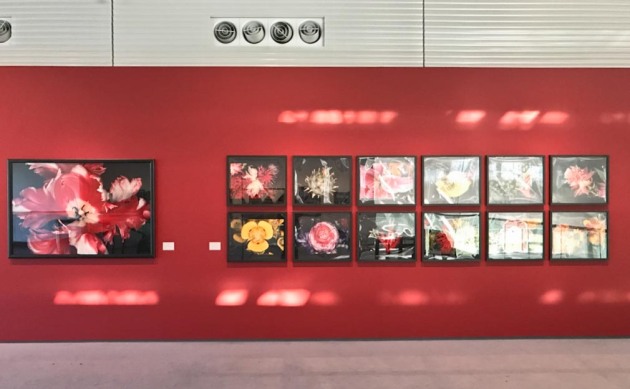 Araki‘s first flower “Tokyo Still Life” (2001), a digital RP Direct Print, that shows the luscious  centre of a flower with surrounding petals. There is sensuality in this oversized upfront colour saturated image. A series of 12 more follow, hung in two rows, one above the other; these are earlier cibachrome prints from 1997 and are called Flower Rondeau.

The very first image of the exhibition, seen on entry hanging beside the introductory text, is Araki’s deeply sensual photograph of a attractively dressed Japanese woman sucking at a watermelon. The sexual innuendo of this photograph is both striking and a little uncomfortable  as the face of the woman  betrays little emotion as she sucks on watermelon that looks rather like a phallus.

Araki’s other work features women, two in bondage of which there is a tradition in Japan; the word kinky does have a Japanese etymology in fact. The kinky images are both in colour but the other photos of women are black and white images, well printed. The reclining nude at the centre from 1955 titled 1995 is in fact in colour though there is little to see,  has a classical feel that would not be out of place in Western art. Has Araki compromised over the years with a foreign culture that early post-war photographers felt at odds with?

The photographs of Eikoh Hosoe feature his well known work, Ordeal by Roses although it was initially called Killed by Roses. This work comes from the 1960’s and is composed of silver gelatin prints. It features a male model, the author Yukon Mishima who had originally asked Hosoe to photograph him. Hosoe later made this body of work at his own request! The images sometimes feature roses, often double or more exposures, Botticelli’s Venus … there is a surrealistic undertone!  There is a lot of naked flesh but there are themes running through the work that do not make it pornographic or even sexual. This is work that needs contemplating for awhile.

Kikuji Kawada is the third artist. His images feature cosmology, images of the moon and sun also stars and clouds. Made during the  1980’s and 1990’s as the third part of the Catastrophe Series and called The Last Cosmology, these images are associated with the end of the Showa period in Japan.

Only 60 photographs in this exhibition yet a lot of these images stand on their own and need time to consider and understand. They are often striking yet their meanings are not not immediately apparent.

There are a few books on a table featuring the work of the photographers. One I have, a photobook by Hosoe. There is a photofile edition about Araki in which it says of Araki, “he has consciously stripped himself of any kind of systematic aesthetic: he does not like what is called beauty … he does not believe in it.” He is not so much interested in photographing bondage rather the reaction of a person undergoing that experience. The French critic Alain Jouffroy advises one not to judge Araki too quickly and this is perhaps true of this exhibition as a whole.

Is this exhibition contemporary? The photographers are all still alive and working but most of the work here is at least a decade old. Personally, I like it for the view it gives of Japanese photography.