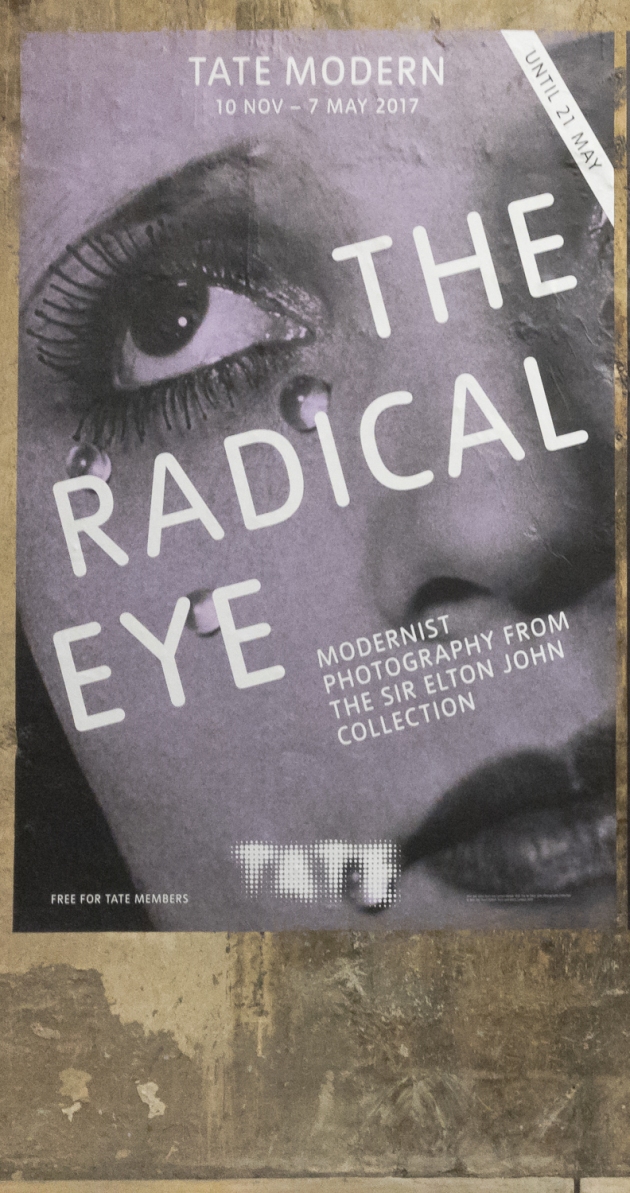 What is this exhibition about? The private collection of a very famous musician who is also well known for being gay, a fine collection of Modernist photography … yet this body of work from a variety of photographers has been curated and a monograph reproduced. I have not as yet read any reviews!

Adrian Earle writes an interesting piece in The Guardian; he sees the tonal depth inherent in the prints, a quality that most reviewers do not tend to notice. There is also mention of the frames which have been criticised as being too flamboyant; Sir John defends his choice of frames by saying the invaluable prints deserve it.

As one might expect, there is a homeo-erotic side to this exhibition but it is not overwhelming. After all, homosexuality did not have the legal status then that it has nowadays. Examples of this include the contact print of Kertesz’s Underwater Swimmer from 1917 to  Csik’s Diver in 1936 and maybe even Weston’s Gourd from 1927. There are however a selection of female nudes including Man Ray’s Juliet and Nieman from 1945 and Koppitz’s Movement Study from 1925.

What makes this exhibition worthwhile is the way it moves beyond personal choice to reflect the Modernist era of photography here seen as corresponding from about 1920 to 1950. The exhibition itself has been divided into sections such as portraiture and documentary as well as less obvious distinctions such as perspective and abstraction.

Something else that I like about this exhibition is that it is not too big. A little over 175 images is digestible assuming one has the time to view it all without rushing. One can enjoy the body of work without thinking one is missing too much although there is always going to be work that might be explored more deeply.

I found the audio guide helpful particularly in the way it combined the curator’s view with Sir Elton John’s obvious love of photography. Reading the essays in the catalogue also helped; this is an exhibition worth studying as well as seeing.

My second visit to this exhibition is with students from The Open College of the Arts. 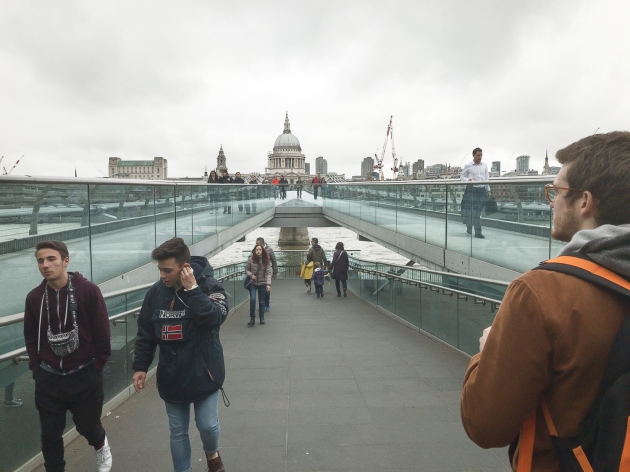 Before visiting, I read through the text on the Tate website  relating to this exhibition that the college send us a link to and I can’t help notice the way that this exhibition is being hyped up. No doubt Sir Elton John’s name will encourage people to see this exhibition yet the mention that “An incredible group of Man Ray portraits are exhibited together for the first time, having been brought together by Sir Elton John over the past twenty-five years, including portraits of Matisse, Picasso, and Breton.” is misleading as many such portraits were exhibited by The National Portrait Gallery in 2013. When a gallery resorts to advertising the art it shows rather than providing an accurate context, the viewer can be discouraged or simply reminded that it is their own interaction with the work that matters rather than one mediated by commentators with vested interests.

The Tate website also suggests that “this is a chance to take a peek inside Elton John’s home” which does not really feature in the exhibition where the arrangement of photographs is not the same as in Sir John’s home although linked.  Clearly celebrity is being used to sell this exhibition rather than the fact that it is a stunning collection of major artworks from the Modernist period of photography. 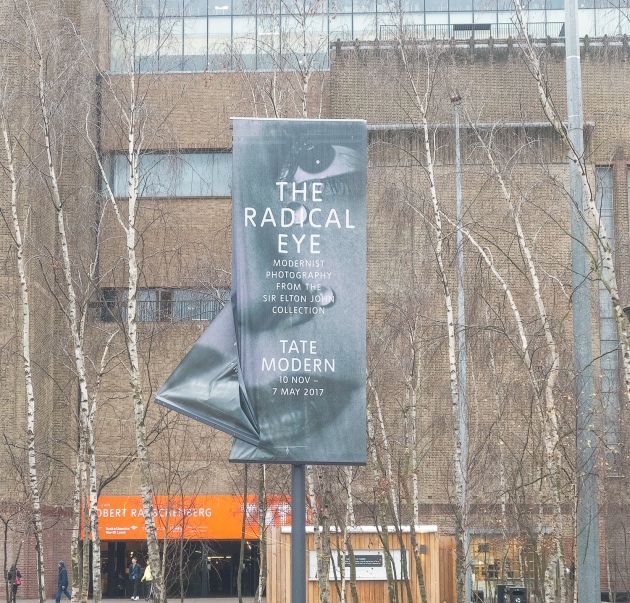 Simon Baker in his introduction quotes Moholy Nagy as saying “that we see the world with entirely different eyes” as a result of photography and that this has brought about an entirely “new vision “. What the Modernist period in photography generally considered as taking place between 1920 and 1950 saw was an attempt to establish photography as a medium in its own right rather than relying on a painterly approach.

An interesting quote on the photograph comes from Salvador Dali who describes it as “unprecedented reality“.

At the back of the catalogue, there is an essay by Shoair Mavlian, the curator, called  Between Precision and Abstraction which sounds like an accurate description of this era in photography that came later than the Modernism that affected other arts such as painting and literature of the latter part of the nineteenth century. One might of course argue that photography helped give birth to Modernism but that is not an argument to consider here. One might though ask whether Modernism is the best term to describe this era in photography! It actually corresponds with the Surrealist period.

Moholy Nagy commented “a knowledge of photography is just as important as that of the alphabet. The illiterates of the future will be ignorant of the use of  camera and pen alike.”  There are a lot of comments by Moholy-Nagy both in and around this exhibition; he had a great insight into the medium.

While photography benefited from advances in modern technology, this also allowed for further experimentation not possible previously.

OCA tutor Russell Squires explains that genres tend to blend into each other. To refer to this exhibition as Modernist is a loose term. Certainly it is a period when photography was establishing itself as an independent medium and put aside attempts to ape painting.

Entrance to the exhibition: a member of staff objected to me photographing here!

A photo of Elton John inside the entrance is by Irving Penn and was made in 1997; more Surrealist than Modernist but then it is not really part of the exhibition though other earlier work by Penn is. Penn lived to 2009.

View from Berlin Radio Tower looking downwards by Moholy Nagy is a very experimental approach that manages to be both document and artistic composition in one.

Modernist  photographers were using black and white although some colour processes were available;

Many photographs in this exhibition are “vintage”‘ which means they were made not long after the time of shooting if not by the photographer then someone working under his direction.

Man Ray’s famous image “Noire et Blanche” from 1926 hangs above his bed both in print and negative form. Man Ray’s Pablo Picasso shows the artist with a belly even at a relatively young age. Other Man Ray portraits include those of the musician and composer Erik Satie, the surrealist Andre Breton and the artist Matisse.

Penn’s Salvador Dali is a portrait that differs from his others since the background has three sides not two as in the other Penn portraits. Of the photograph, Dali compared his painting as “hand-done colour photography”.

So many portraits of interesting people from the Modernist era are included here.

A Forgotten Model by George Platt is poignant; relevant to today’s treatment of women in the model business.

Gloria Swanson does not look very happy yet her eyes are piercing and gaze directly through the black lace that covers her face while being photographed by Edward Steichen.

Photographs emphasising the form of the body!

Herbert Bayer Lonely Metropolitan  What draws me to this image? I know it yet it also is mysterious. The fact I can’t pin down a single reason that makes me drawn to it is perhaps why.

Emmanuel Sougez Carnival is Dead another’s image featuring masks. This photographer has also made some interesting detailed studies as in those of wheat and tulips as well as cabbage.

Just one Ansel Adams, a photograph of a lone church; this absence of his work is perhaps significant or it maybe that Adams is not really considered to be a Modernist.  Ostrich Egg by Man Ray is an excellent example of tonal rendition in a photographic print during the early days of the medium. Adams was very influential in improving the basic quality of black and white prints..

A couple of noisy children are in the gallery being pushed around in a double push chair. Their mother tries hard to keep them quiet but without success.

While surrealism is inherent in the medium of photography, many of the photographs in this exhibition reveal a Cubist influence.

Kertesz works reveal his brilliance. Not Polish as Elton John says during the video installation but Hungarian like Moholy Nagy.

Edward Weston writes in 1924 that “The camera should be used for a recording of life, for rendering the very substance and quintessence of the thing itself…”

The Modernist era, (one might question the applying of that label to this exhibition), is always encouraging as it saw photography creating new guidelines that are largely unique to the medium.

The OCA discussion follows for an hour afterwards. This tends to be rather opinionated with familiar voices airing their grievances while our tutor for the day, Russell Squires, is hardly listened to yet graciously concluded afterwards that there was at least a discussion.  Much of it seemed to centre around Elton John who was not what the exhibition was about; the obsession with celebrity though played a part in this exhibition! Some of the criticism from students seems based on ignorance; they have not done their research or looked very far into the information about this exhibition. Most students however are reasonably quiet and listen; some provide valid viewpoints based on observation rather than prejudgement.

I enjoy seeing other OCA students I know and meeting ones I do not. In spite of lively exchanges on Facebook and in the forums, it is good to see a human face to face. 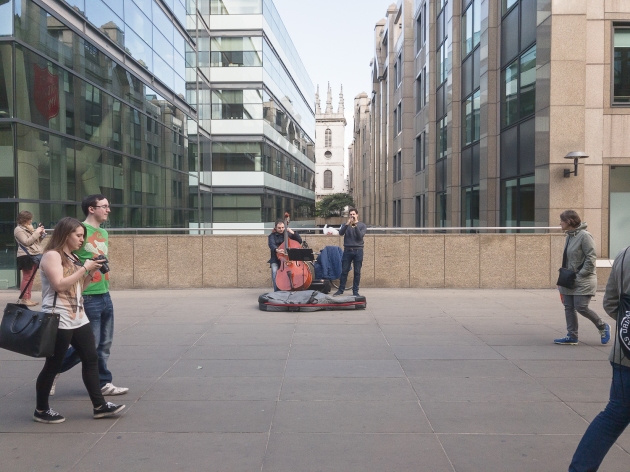 2 thoughts on “The Radical Eye: Modernist photography from the collection of Sir Elton John”