“What attracts you if anything about this exhibition!? Any work that strikes one?” asks OCA tutor Jayne Taylor as a group of over a dozen students meet. I have been reading the catalogue beforehand and find myself intrigued by Tillman’s approach yet wonder about what he is saying. It seems he is making observations of the world around him and using the medium of photography to do it; a stream of consciousness technique. Being allowed to photograph this exhibition made it more approachable! A previous visit to a Tillmans exhibition in 2013 is HERE

This exhibition is curated by the artist Tillmans rather than by a professional curator; there is no linear progression to the work being shown which presents a wholistic vision of the world. Open ended, not making a statement rather revealing something. 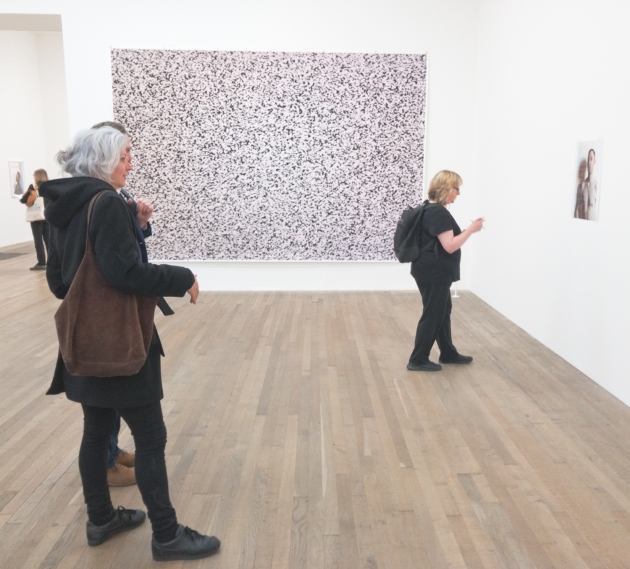 The initial photo on entry is reminiscent of a TV screen suffering interference. Colour here is interesting as it seems to change according to the angle of view. It is called “End of Broadcast 2” 2014. I find that it resonates on a personal level. It is repeated at the end of the exhibition which is where this image is from.

There are travel images yet also close to home images such as those of computers and printers. His setup looks not unlike mine! 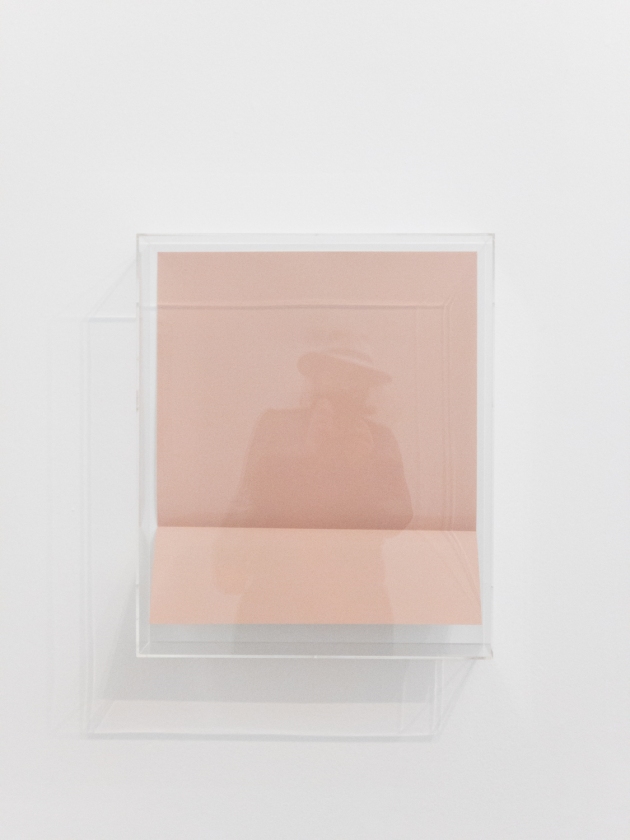 I like the single blocks of colour such as the beige “Lighter, unprocessed ultra 1” 2010; the photograph of this contains an outline selfie! 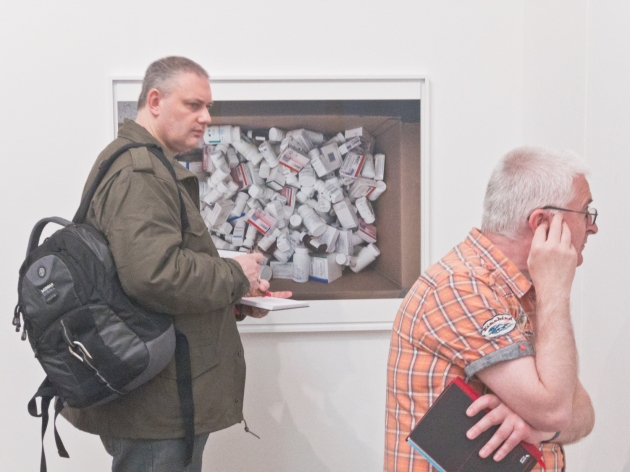 17 years supply, 2014 (refers to medical supplies) is a very well lit photograph that looks stunningly real from a distance; I needed to go close up to make sure it was not a sculpture. A reminder that Tilmanns did actually train as a photographer and is technically proficient. In fact, although from Germany which is where he now lives, he did study at art school in Bournemouth and lived awhile in London.

A lot of the work is pleasant to look at remaining free of easily definable meaning. 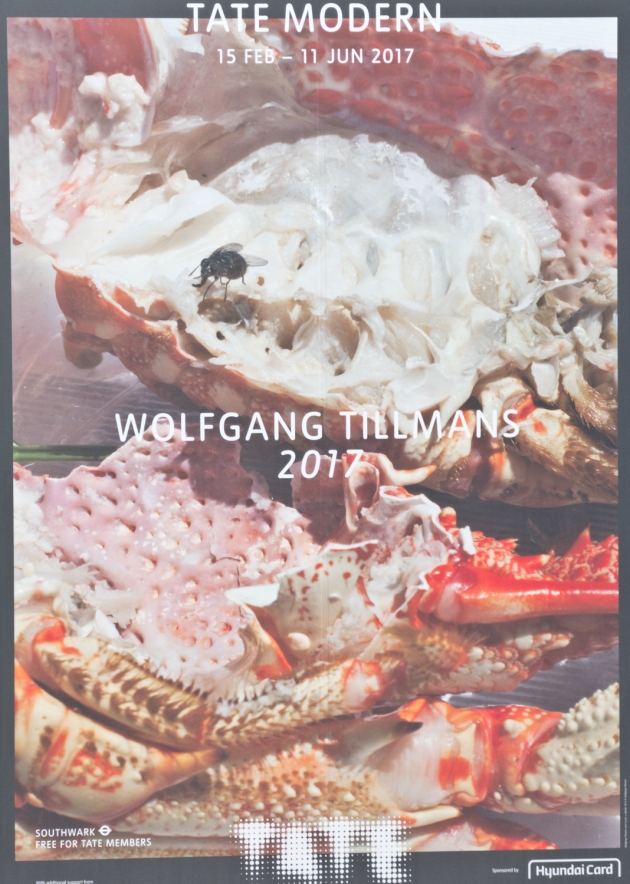 Auto crusto a, 2017 has a touch of Martin Parr about it but the presence of the fly is different. The photograph above is of the poster used to advertise the exhibition. 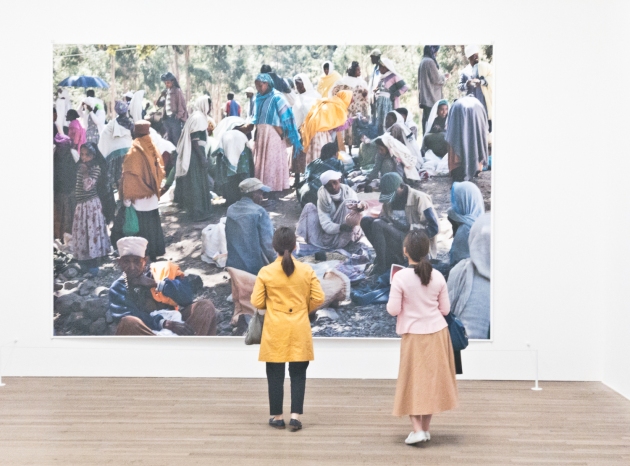 Ethiopian market is a huge photo without a trace of grain. Tillmans makes use of Photoshop to present his photography. 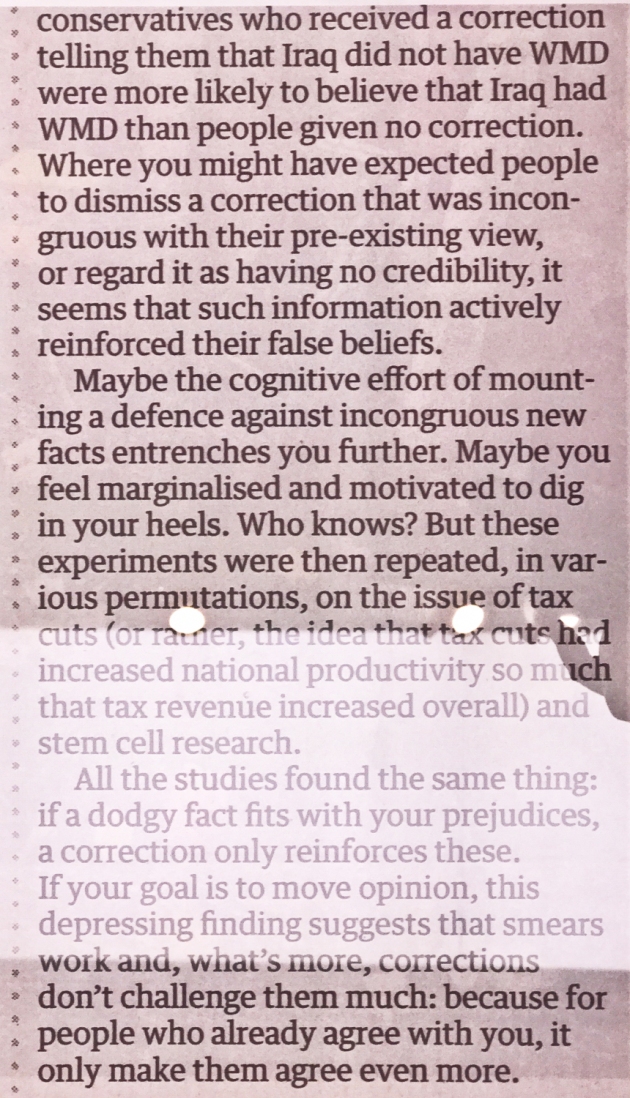 I have limited interest in politics but a blow up of text about Saddam Hussein having no WMD that Western politicians refused to accept brings back memories of a time when the West got it wrong and went to war on a whim! 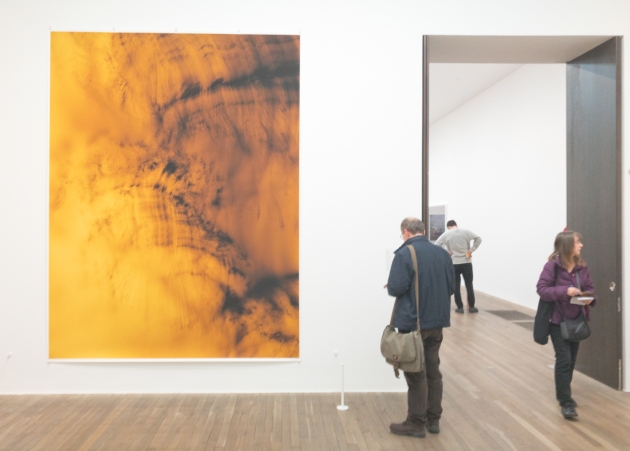 The solid blocks of colour are also presented with marks on. These are hung around the walls while political print outs are on tables within the room. In fact, the large colour blow ups do not feel out of place here; they are allowed to merge with the other more grounded exhibits. 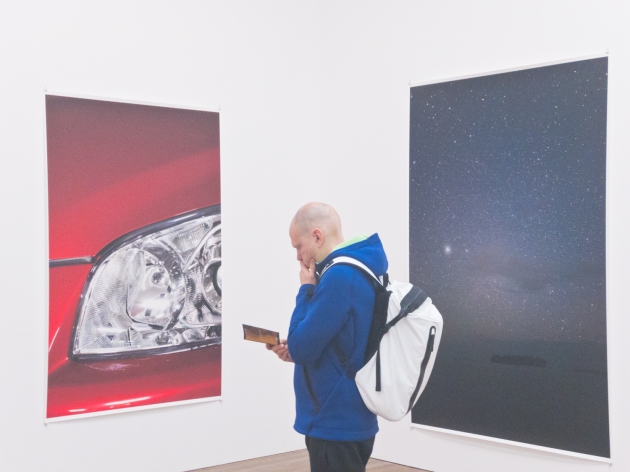 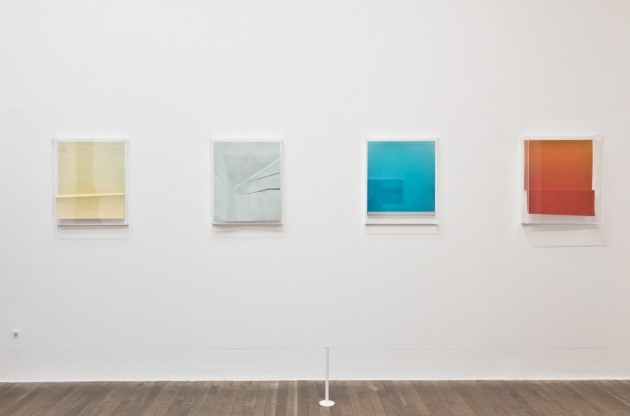 The images are varied; a lot of different subjects covered. From solid colour blocks to  intricate detail sometimes in the same image. 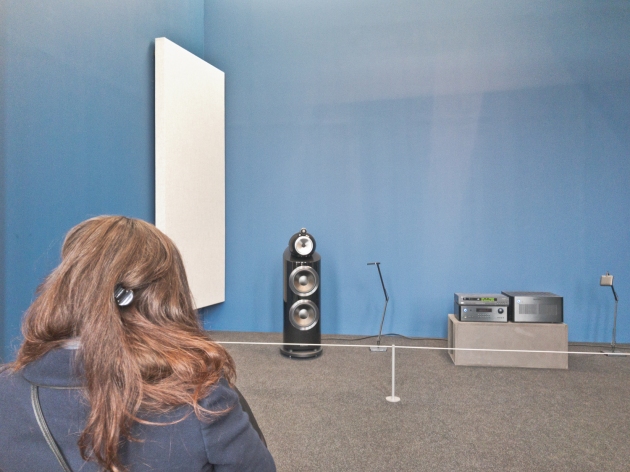 The exhibition space is a labyrinth through which one is free to wander. One room contains large grey panels and blue walls; a sound system plays both music and sound bytes. One can sit here and relax, take a break from the main part of the exhibition! It is called “Playback Room” and is an ongoing project from 2014. The music is background rhythmic; I would happily get up and dance. The sound bytes are of human voices drawn from different sources. I could stay here for much longer but am in a group due to meet again soon! Reluctantly I leave this space! 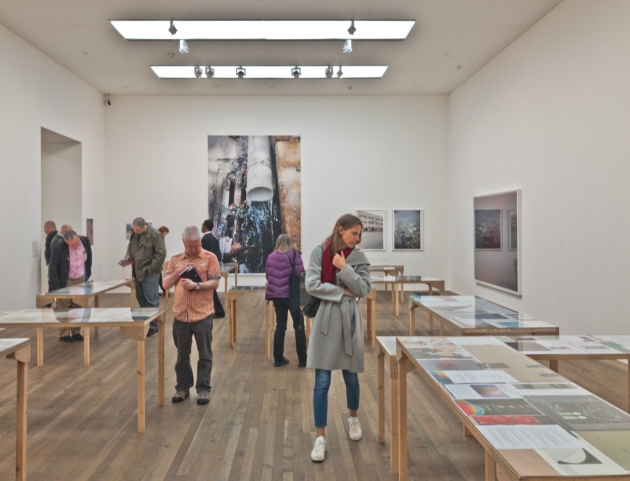 There is also a video room that feels uncomfortable to me. A man runs on the spot facing a wall while in another image only a jogging shadow is seen. The music is discordant! Am not sorry to leave! 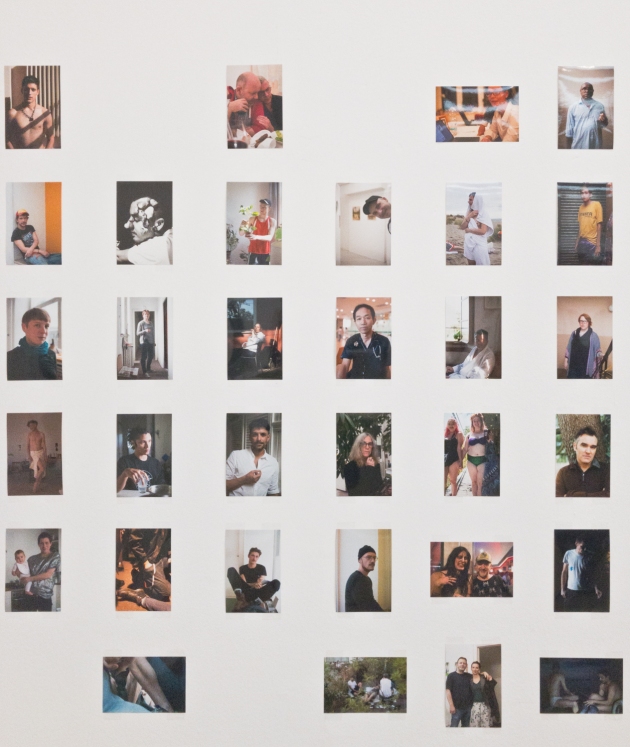 A mosaic of portrait sized photos on one wall; one of these looks strange! Unlike the others it is not a straight image. The head looks as though it has mould on it! 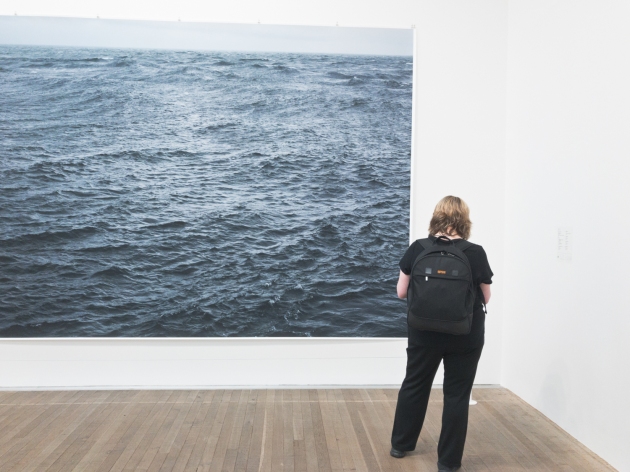 Tillmans seems to be inviting us into a stream of consciousness … he says, “The beginning of the Iraq War was 14 years ago now!”

The photographs are unframed!! ” … encouraging the viewer to interact with the photograph as an object, rather than a conduit for an image.” 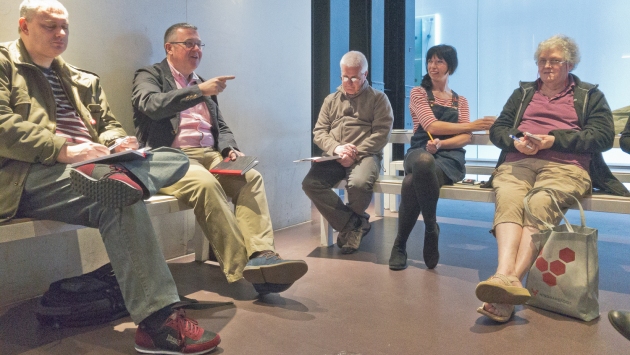 We, a group of Open College of the Arts students, find some LUNCH and then CHAT in one of the rooms that the Tate Modern makes available! Some points are made …

_ Need to look at videos from exhibition. Is the artist successfully in saying what they want!? What about the way they are expressing it?

_ Way images were hung with clips and tape etc

_ Show itself a giant collage !

_ Unconventional approach to exhibiting. Lack of logical order to exhibits.

_ Captions not next to images allows them to breathe; they are not entirely necessary.

_ Life is now deluged by a plethora of images as this exhibition demonstrates. Placing of images appropriate as well as varied.

_ Exhibition like an album, each room a different track! Not being told how to see the work.

_ Tender portraits made without judgement.

_ The lobster photograph which also has a fly; other artists like Damian Hirst have objectified animals in close up and made them large.

_ Tillmans has a lot of self confidence? Secret of his success? I think he has the ability to see!!

_ The Turner Prize has given Tillmans carter Blanche to do what he wants and forge a way for photographers generally!

_ Was the exhibition too much about Tillmans?? He is working with others! 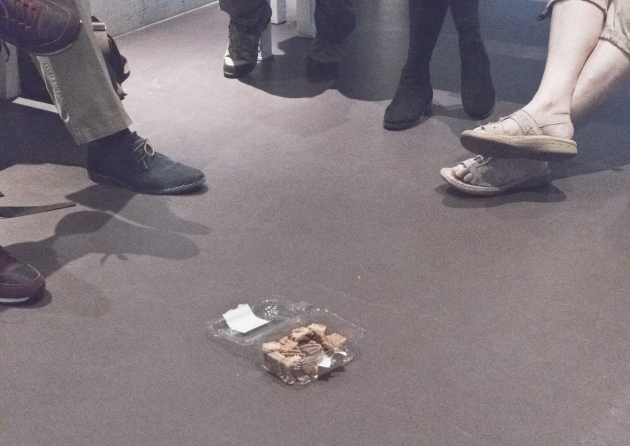