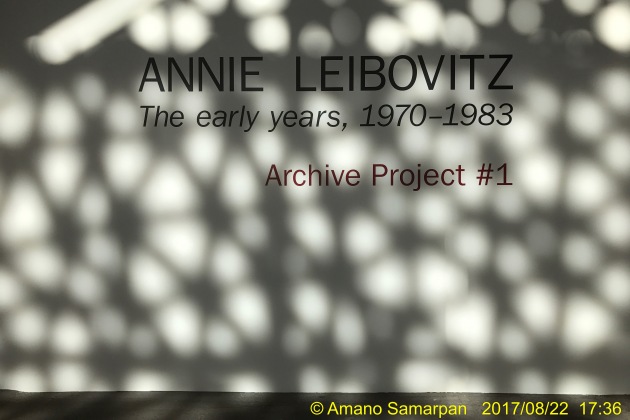 “Annie Leibovitz’s reputation as a photographer was secured during the 1970s, when she worked for Rolling Stone magazine. She has been creating important images for nearly fty years, but her origins as a young photographer have rarely been exa- mined. This exhibition presents an unprecedented view of the early work. Leibovitz has returned to the original material and selected over 5,000 images that she has installed in a series of spaces that trace her evolution as an artist.

She was still a student at the San Francisco Art Institute when she began working for Rolling Stone. Her primary influences were Henri-Cartier Bresson and Robert Frank and she approached photography from the point of view of reportage. More than at any other time in her life, she was photographing the world around her on a daily basis. The lines had yet to be drawn between journalists and the people they covered, so she had access that would be considered unusual now. And since politics and pop culture had merged, the range of subjects was vast. The exhibi- tion provides a wide-ranging view of the era, which was shaped in the United States by the war in Vietnam, a volatile political landscape, and the rise of a powerful and influential counter-culture.

Leibovitz’s revisiting of this early work can be seen as both an archaeology of the self and a re-examination of history.”

Annie rose to prominence in the days of flower power while working for Rolling Stone, the newspaper. The first space of the exhibition gives an outline of the history behind these images that run from 1967 to 1984, a time when I was growing up and exploring the world. Hence the period she covers is a slice of history that interests me directly. For some reason this exhibition costs more than the general entrance ticket allows!

It is not easy to determine the kind of print that Leibovitz is using but it does not look particularly fine tuned; digital or chemical, I can’t tell. The prints are literally pinned to the hardboard walls and protected from the viewer by flexiglass. There are no captions.

This exhibition might also be seen as stages in the development of a talented photographer who began studying art in San Francisco and also learnt photography by taking a few classes to learn the basics. Photographing John and Yoko Lennon obviously gave her a breakthrough.

In the second gallery, another section constructed from the same cardboard wall shows more photographs (there are about 5,000  images selected by Leibovitz for the exhibition) this time with nearby text giving a list of the famous people pictured though it can be hard to put the names to the photos since although the people are numbered not all the photographs are. However this is largely a portfolio of the people of that time caught in nicely composed and well exposed frames; in fact, the edge of the frame is included in the print as a testament to their authenticity as documents rather than photoshopped images.

Leibovitz had established herself as a photojournalist by the time she left The San Francisco Art Institute. She was moving with the makers and shakers of the age. One famous person after another; it is a little tiring yet a wonderful record of the era. Photographs covering the resignation of Nixon are less glamorous yet very historic. Many are offbeat in classic photojournalists style.

Not only did she work for Rollingstone the newspaper, she also hung out with and photographed the Rolling Stones pop group. A hedonistic life style but one that reflected the era.

One amusing set of images, some of her early colour work, is a series of Polaroids documenting the policemen who stopped her for speeding and gave her a ticket on the freeway between San Francisco and Los Angeles. Leibovitz also produced a book in 1976 about the photographers she admired which included Cartier-Bresson, Ansel Adams and Jacques Henri-Lartigue.

I do not recognise all the people she photographed, celebrities in America, or her family but there is a consistency of style in the graphic black and white images though colour does start to come into her work during the 1970’s.

Most of the people she has photographed are people whose celebrity was thrust upon one; Susan Sontag was someone I chose to read. I look for her image but cannot see it named though fancy I do see a small collection of her.

Towards the end of the 1970’s, she starts making more formal photographs with a larger format camera. These are more considered and based on ideas. One is the iconic image of John and Yoko made a few hours before he was shot.

In the early 80’s, Leibovitz left Rolling Stone and went to work for a revamped Vanity Fair. Her off the cuff in the moment photography of the celebrity world around her was replaced by a more considered less spontaneous approach. Yet she continued to innovate and produce original imagery; Whoopi Goldberg half submerged in a bath of milk is a classic example of her originality. I like a photograph of Philip Glass from this time though it is a straight black and white photograph largely free of artistic intentions.

This exhibition is a remarkable record of American life at an important moment in its development. It is great because although autobiographical it is not about the photographer rather the world she personally encountered and documented.

There is something almost sloppy about the way the exhibition is presented which reflects the devil may care attitude of the era. Reading the catalogue that accompanies the exhibition helps to understand the nature of Leibovitz who is clearly a sensitive artist working in a world which accepted her as one of its own. 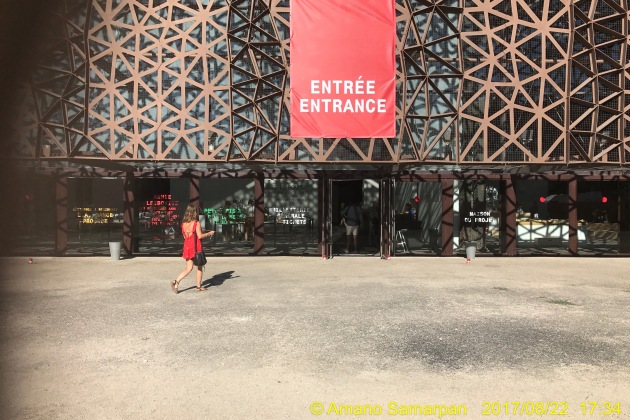