“I met the Gorgan family in 1995, while studying at the École Nationale Supérieure de la Photographie in Arles. I knew nothing about these communities, and was unaware that this line of Roma had been in France for over a century. My first works were in black and white, placing me in a documentary tradition in the face of what I still found strange. The discovery of several archival documents that they possessed quickly taught me that a diversity of forms and points of view were necessary to take account of the density of life that came into my view. It was in 2013, more than 10 years after those first photos, that we met again, as if it were yesterday. In their company, I lived an experience which surpasses the experience of photography. The exhibition recreates the circumstances of each member of the family, and recounts the story that we wrote together, face to face, then side by side.”
Mathieu Pernot

“Les Gorgan – 1995-2015” seems to be a classic example of documentary photography in which the photographer is participant rather than onlooker. Pernot lived with these Romany gypsies as a friend and witnessed their plight over the years. 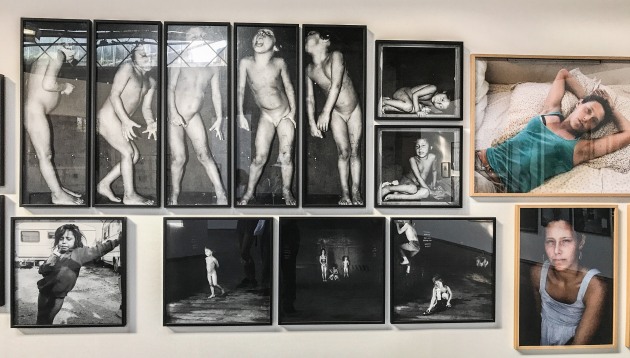 The photographs are varied in composition and read like family snapshots. Each major family member has a wall to his or her self so one gets a sense of the people involved. The imagery tends to focus on the people rather than their circumstances though these can be inferred from the backgrounds. Although these people live in poverty on the edge of society, they are portrayed as being very human.

It is their day to day life we see being enacted. The video is showing in a booth at the end of the gallery is more revealing. Rather than showing special moments, it records more ordinary moments, the passage of ordinary life.  One becomes more aware of their natural dignity and what they are really like as people.

One series of photographs about Johny born in 1964 shows how much these people age during their  lives, a result of the hardship they undergo.