The American colour photography master Joel Meyerowitz began his career in New York in the 60s. As a street photographer, always out and about in the heart of his city, Meyerowitz slips and dodges through the urban fray, his eyes ever on the alert. His complex compositions toy with the notions of imbalance and deframing, and seem suspended as if by a thread. For the first time in France, the Rencontres d’Arles will exhibit forty original prints by Joel Meyerowitz, with a selection of his first photographs in black and white and in colour. 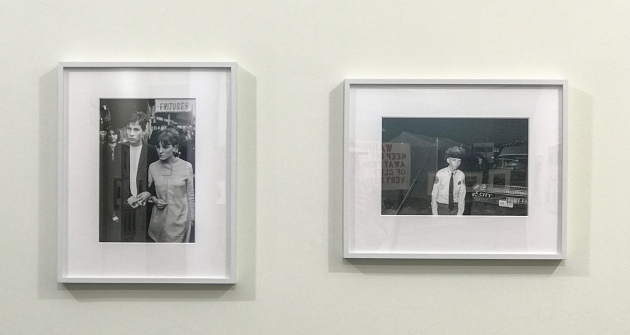 The first photograph is a black and white of a young couple in Paris from 1967; they are conscious of being photographed. Next is a young guard from Florida, the night before the moon launch of 1969. The two images complement each other as both show young people, none of whom appear to welcome the photographer’s presence.

More black and white photographs follow … from New York and one from Paris. What is this group of images saying? There is no obvious meaning neither is there any great technical virtuosity evident but these scenes are encounters between people.

Next is a family scene from Atlanta in 1971; 5 people in front of a window.

Atlanta is the scene for a couple of other images from 1971. People and place finely observed.

A group of four images and it seems clear that Meyerowitz is playing with composition here; subject is perhaps secondary though these are documentary records of America in the 1960’s.

There is a photograph from Spain (1967) of Circus girls on a tightrope before a car photograph made the following year in America; the possibility of accident and the scene of an accident both images mirror suspense. 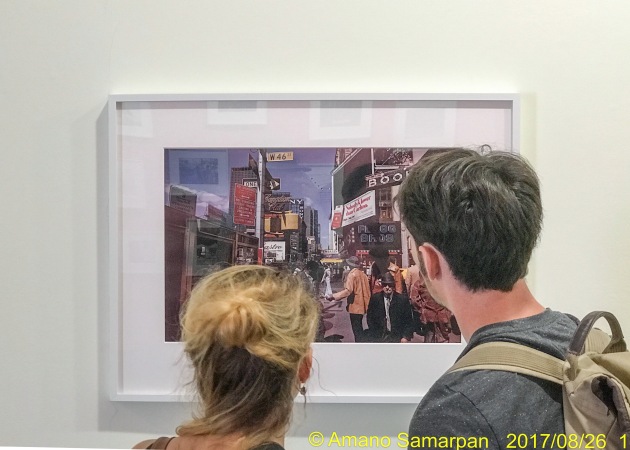 As Meyerowitz moves to colour, one of the first professional art photographers to do so, there is an immediate change in the dynamic. Meyerowitz in the mid-1970’s also seems to be changing his subject matter with more spontaneous wider view compositions that capture action. At least, a photograph titled Broadway and 46’th Street, New York City, 1976 answers to this description. There is parallax and detail lost in shadow but this seems to be part of the picture’s overall appeal.

Back to earlier black and white work; more drama in public places. A couple involving dogs, a couple women. What is going on in these scenes? People interact haphazardly as in much of Meyerowitz’s work; we can not draw conclusions without making assumptions.

Another colour photograph, this time two camel-colour coated couples in New York from 1975; they are approaching a mysterious cloud of steam that drifts across the street.

Back to 1960’s black and white work mixed up with colour . The subject is still the street and what is going on in it with a couple centring on the automobile. In one photograph, top left, one of the three colour photographs and made in Paris, someone has lost their hat to the wind and the hat hovers precariously at the top of the elevator while another woman holds tightly on to hers and another woman laughs. People look on. Meyerowitz seldom reveals such obvious meanings in his images! 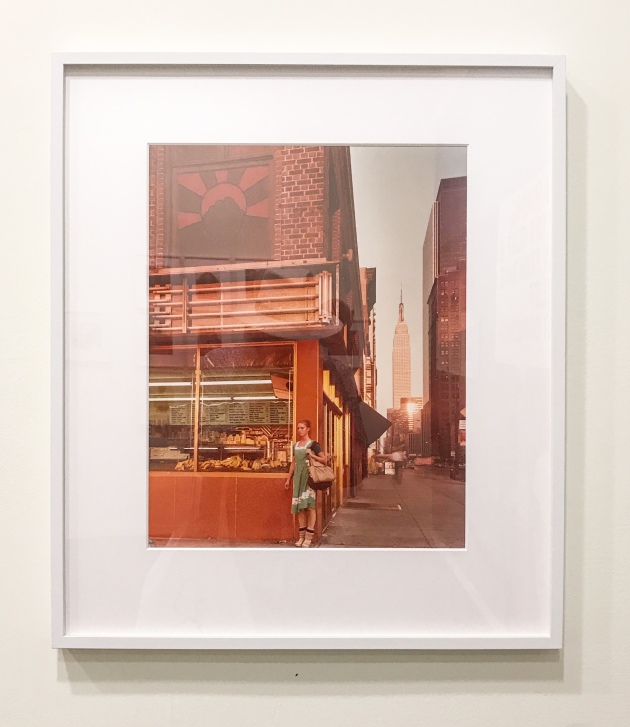 Back to colour and the late 1970’s with a young dancer standing alone on a street corner with the Empire States Building towering in the background; the light is a soft golden warmth. The figure looks as though she has been posed.

One wall of the gallery shows a giant blow up of a Meyerowitz photograph that shows a couple standing on the edge of a cliff by which a large sign warns them that doing so is “very dangerous”. Is suspense a Meyerowitz theme? There are also six photographs hung over the huge one, small framed images that show residences, secure places in contrast to the danger implicit in the larger photograph, places where people can sleep.

Continuing a beach theme, the next group of photographs are of scantily clad people, colour portraits from the 1970’s. These are tender particularly if they are of strangers which would appear to be the case; people posing for a photographer on the beach. The place is given sometimes the name of the person pictured. “Land, Provincetown, 1976” is a colour photograph of a wayside restaurant with cars and an ornate tower in the background. 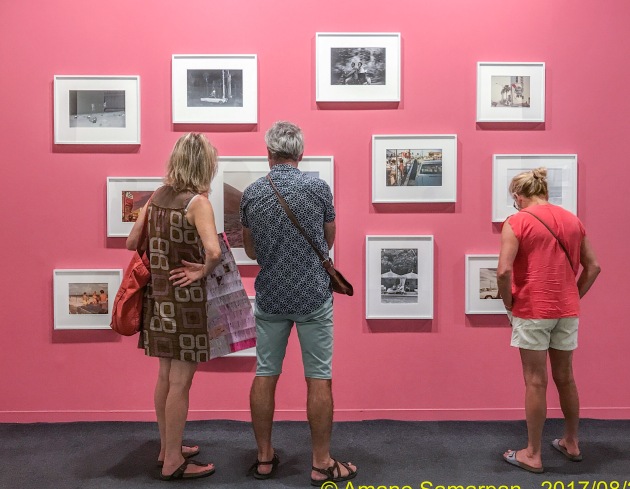 The final display of photographs is 12 colour as well as black and white images, from different times ranging from the late 60’s to the early 80’s. They are singular images and do not appear to conform to a whole. They perhaps are personal choices made by Sam Stourdze, the curator of this exhibition and organiser of the festival as a whole.

The final photograph of the exhibition is a small sized image of the one blown up to fill a wall; two women standing with their backs to the photographer and beside a sign that warns them that the cliffs are dangerous.

One aspect of Meyerowitz’s work I like is that it is complex but straightforward, his street scenes are spontaneously caught and his portraits are carefully arranged, he is not hoodwinking us! I also like this body of work because Meyerowitz is a consummate professional, he knows what he is doing. There may not be much rapport with his subjects but he understands them.