“Fukase: The Incurable Egoist is the first retrospective of Masahisa Fukase to take place in Europe, allowing much previously unseen material to leave Japan for the first time. Fukase is widely regarded as one of the most radical and influential photographers of his generation. This presentation considers all aspects of Fukase’s practice from the 1960s onwards, drawing on vintage prints, graphic work, as well as archival magazines and publications, to show the extent of the artist’s working life. Dealing with issues of family, love, friendship, loneliness, mortality and death, activated photographically through performance, self-portraiture, play and comedy, the exhibition establishes Fukase as one of the most innovative and original Japanese artists of the post-war period.”

This is one exhibition I very much want to see at Arles this year. Japanese photography is very different to most of what we see in the West. This exhibition of Fukase’s work is called The Incurable Egoist and is apparently his first European retrospective. Sadly, following an accident, he lived the final part of his life in a vegetative state. The exhibition is curated by Simon Baker of Tate Modern, London.

Just before going in, I chat with an English artist who has seen it but could not make much sense of it. I am aware the work can be challenging and am prepared to take time to understand it. Commentaries are on the walls in some places but I am not sure I agree with them … for instance, spirals are surely uplifting symbols rather than merely endless; one finds them on ancient stones.

The first photograph that grabs my attention on entry is a head and shoulders black and white of Fukase over which he has drawn circles and other jagged lines embuing his image with a sense of presence. His face is partially obscured yet one senses a human presence.

To the right of this are a couple of large Polaroids which combine different images; while one is a self-portrait with coloured pins stuck into his face, the other is of his cat!

I have seen and written about Fukase’s Ravens elsewhere but shall devote more time to this body of work; I recently bought the photobook which has been republished and so available for a reasonable price unlike the original 1986 version. The raven is a symbol that conjures up a mythology which can vary from place to place. 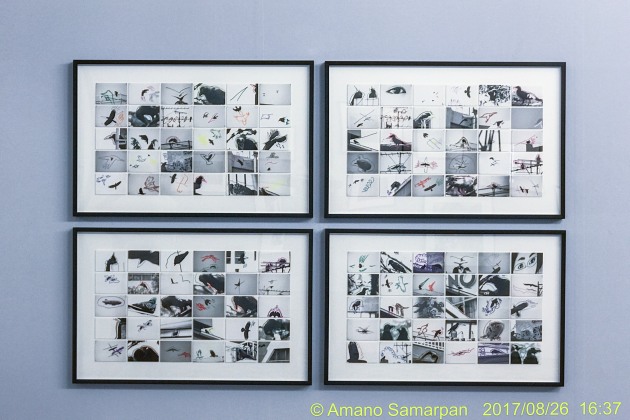 There are 30 prints here and a group of smaller ones placed inside larger frames; these have been drawn over by Fukase and are selected from over 1,000 prints numbering 120. Most are close ups of Ravens, Fukase used a 1,000 mm lens, but some are of other objects such as balloons, helicopters even a turtle dove. The drawings seem to echo the dynamics of the flying objects.

Often referred to as the Solitude of Ravens, this work was made in the aftermath of divorce from his wife, Yoko. The Ravens are not always solitary however and we sometimes see them in large groups. The photographs are not of high technical quality but it is lack of focus or flare and other imperfections that make them appealing. Silhouettes work effectively in conveying a somber mood as does bokeh. Some images are lithographic in quality.

Ravens has been released as a series a number of times. Later editions employed colour and used layered negatives. Ravens: Noctambulant Flight makes use of montage techniques and there are inherent references to Yatagarasu, the three-legged raven of Japanese mythology. Fukase however referred to the “dangerous unrestrainable nature of montages” and decided not to continue working with them. Some of these images are striking such as the kneeling naked woman in the raven’s wing or the raven and the sea. Some of this work appeared in books and magazines, a few of which are visible here. 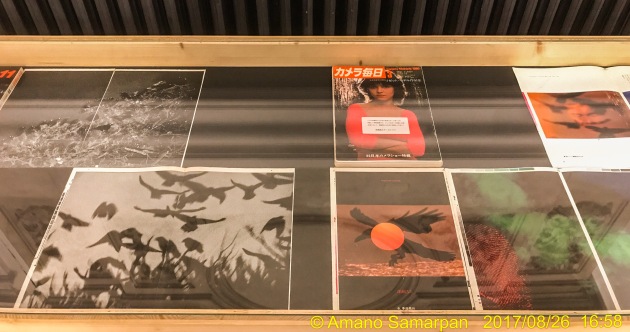 Cats were another subject Fukase liked to photograph as do millions of people, cat photographs being very popular on the internet. The star was his cat Sasuke; one series focused on his open jaws but he was particularly fond of catching his own reflection in the cat’s eyes. Fukase an incurable egoist or simply narcissist!? 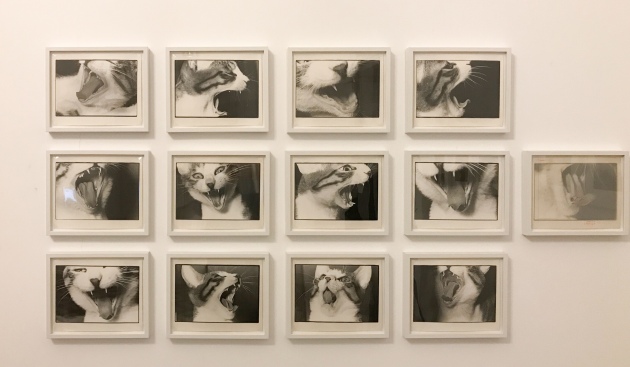 A video screen plays showing a sequence of photographs. His wife featuring naked in a family photograph where other family members are attired is an interesting juxtaposition; other images show a range of subjects.

Homo Ludens focuses on the body particularly that of his first wife pregnant. These are playful images involving distortion and intimacy. Play is in fact the title given to this room of Fukase’s work. Reference is made to the book Homo Ludens (1981).

Private Scenes is among the last body of work Fukase produced. These images are stretching the limits in their use of the medium with the use of painted colour on black and white prints.  Many include his self portrait but are not merely self portraits since they include scenes in which he plays a role even if only of witness. 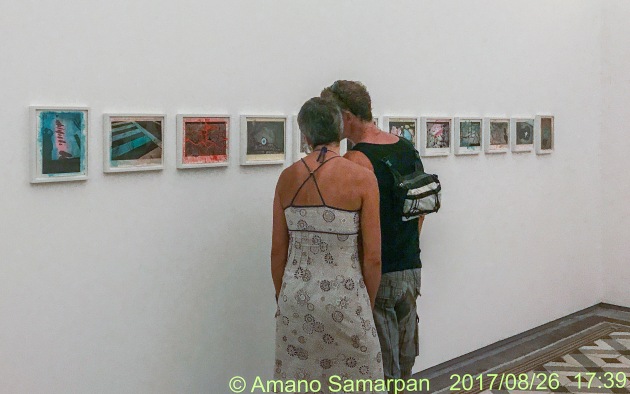 Hibi means cracks or fissures which is what one series deals with. These are intriguing designs yet with a darker meaning attached. They have been made into a book which is available in the foyer of the exhibition; Ravens is elsewhere.

Bukubuku is an alliteration in Japanese for bubbling. In this series Fukase uses an underwater camera to photograph himself in his bath. The work is introspective and humorous, well conceived and photographed; narcissistic perhaps yet unique in self portraiture.

Berobero is about the custom of touching tongues. Fukase photographs himself doing so with a number of people some well known photographers like Daido Moriyama and Nobuyoshi Araki. With colour brushed over they look a little strange but remain momentos that savour intimate moments. A sign on the gallery wall suggests that if one is inspired by this series one might like to post onto Instagram #berobero And #rencontresarles

On the way out I see a few Polaroids I had missed on the way in; lurid colours suggestive of self-harm like a pin in a tongue. This is unpleasant to look at while most of the work in this exhibition although not necessarily attractive (the family portraits are an exception) does not induce such feelings of discomfort.

Is Fukase really an incurable egoist as the exhibition suggests!? Perhaps Fukase thought the same! I see him as someone exploring himself, trying to understand who he is which in a society like Japan might be considered an honourable trajectory or way to live one’s life while in the west a form of self-indulgence.