The College had another study day arranged for photographers; a visit to an exhibition of photographs in Sheffield which have been made by an OCA student living in New York. In the end, I found myself unable to attend so here is a link to an excellent account of the day by fellow student Eileen Rafferty .. 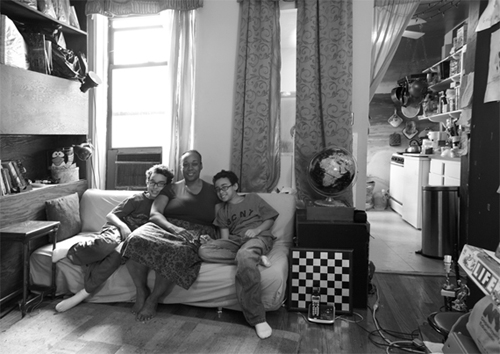 We are treated to a video interview with the photographer, Tanya Ahmed, a British sounding woman who has been living in New York and rephotographing East 100’th Street 40 years after Bruce Davidson was there. In his time, it was a very run down area, a ghetto for drug takers and no-hopers; although the buildings remain and the similar kinds of people? live there, the area is no longer run down. Tanya’s images attempt to capture the place as it is today beyond the popular preceptions of gentrification. More images can be seen here …

According to Ahmed, the area is now inhabited by regular folk living in a rehabilitated area. She lives there and set out to give an up to date view of the place in which people are pictured in their own homes. Her neighbours did not know much if anything about the history of the street or the photographer Bruce Davidson. Ahmed wanted to photograph the present day community, “us”, and explained to them her motive as a student of the OCA. She was not only interested in portraying the place but also the people who inhabit it; her exhibition is composed entirely of interior views! Ahmed has been in touch with Bruce Davidson who has been supportive of her work and interested too. He did return to 100’th Street but has not visited for sometime. Ahmed has been a working photographer for sometime and enjoyed the collaboration with others while making this body of work. Her comment on the OCA website was … “This whole experience has been amazing and it has been wonderful to meet everyone involved, they have all done a brilliant job and been exceptionally nice. Thank you also to all the students taking the time to follow and comment on the various posts of my work, I feel like I have a new set of best friends”

My own comment of the website ruuns thus … “What interests me about re-photography is the contrasts that exist between the two times pictured. There seems to be no deliberate attempt on Tanya’s part to emphasise this by, for instance, rephotographing the same places from the same point of view, rather it is about the general atmosphere of the place which appears to have changed for the better.”

To see some of the photos by Bruce Daidson …

For a peek at the book …

He was interviewed by The Guardian about this body of work …

Another interesting read is …

Ahmed’s approach is not as different as might at first appear to be the case. Her photographs are setup, arranged beforehand, while Davidson’s photographs that appear to rely on the spontaneity of the moment were often made with a tripod mounted camera. Davidson however, was working with a political brief, showing the way people there were suffering from poor living conditions. Ahmed on the other hand sets out to present the place as it is today, a place she is happy to live in; there is no stigma to what she is doing.

Ahmed has also had her work commented on by Maggy Milner, an OCA tutor, who was struck by the quality of her photographs. She describes them as extraordinary, well made prints, with thorough attention to detail. Ahmed does not give much mention of technique rather the concept behind the photographs and her research. She lets the families choose where they want to be photographed unlike Davidson who approached as a photojournalist yet worked on the project for a couple of years and ended up getting to know his subjects. Her submission to the OCA was not just the prints but also her comments on images via post-cards.

One student, Dewald who lives in China, comments “There is constant discussions going on everywhere, OCA, Flickr and on here, where students are told NOT to produce material specifically for the approval of the assessors.” This makes good sense since I do not think I shall be making the kind of work that the assessors want to see. For instance, photos of the outskirts of Delhi with quotes from the Bhagavad Gita; the assessors won’t know the place and probably find the quotes incomprehensible.

Dewald also says, “This work of Tanya seems to be a combination of an immense amount of research into a photographer and work that has a connection to where she herself is right at this time, not only as a person, but as an artist. The fact that she then went out and got involved with people who live around her, and built that kinds of relationships with them, is admirable in an age where I think very few people bother to even acknowledge other people living in the same building.”

Tanya comments on her submission … “I don’t want to speak for the assessors, but IMHO I think it is more than just the final collection of images that they considered. Obviously they had much more information than just the images about the concept and the way I progressed through the project. The basic premise of which was that I wanted to see if being an insider made a difference to the images produced. I used Davidson’s book as a stepping stone and considered his images against mine to see if what I was doing was different and why. On the face of things we were doing the same thing but in reality we were not. Each time I found something different I looked into it- One example I analyzed how people were looking at his camera, how they looked at mine, with some book suggestions from my tutor I looked back through history at portraits and justified the approach I used. Obviously you and any other audience will only have the final images to judge. The question is will you see the behind the scenes work in the images? Will you see a thread or an approach tying them together? Will you notice a different mood or different focus than in Davidson’s work and is there a difference in the work of an insider compared to an outsider? I hope this little bit of explanation is helpful.”

Tanya emphasises the collaboration that took place between her and her subjects.

Interestingly, a MOMA press release made at the time of Davidson’s exhibition, states …”The antithesis of candid photography, these pictures are the product of a conscious collaboration between photographer and subject”.

John Szarowski who was at that time the Director of MOMA photography said, “he (Davidson) has shown us true and specific people, photographed in those private moments of suspended action in which the complexity and ambiguity of individual lives triumphs over abstraction.”

For me, the parallels between the two photographers approach is striking. The most obvious of these is the use of black and white.

There is more comment on We Are OCA;  I write …

“As someone just beginning the PWDP module and hence occupied with photographing his locality, a rural street, I found this video helpful as well as being a good introduction for tomorrow’s visit.

What interests me about re-photography is the contrasts that exist between the two times pictured. There seems to be no deliberate attempt on Tanya’s part to emphasise this by, for instance by rephotographing the same places from the same point of view, rather it is about the general atmosphere of the place which appears to have changed for the better.”

“I wrote about rephotography for my level 3 essay. I did take one photo, a street view, that later I realized was in Davidson’s foot steps, it gave me a thrill when I realized it. However, I really didn’t want to go round looking for Davidson’s footprints, I was more interested in my own. I wanted to see whether time and my insider status made a difference to the subject matter and the resulting photographs despite being in a very tiny geographical area. If I had limited myself to trying to restage Davidson’s images I might have got a superb lesson in understanding his subject and technical choices and yes we would have seen easily observable changes but I don’t think my voice would have been there at all. The way I did it was to try to understand his work through comparison with my own. For example, how and in what numbers were children portrayed by both of us- this is one of the biggest differences between us and relates to both our gender, our age and experience in the street. I hope you are enjoying photographically discovering your street”

I then commented again …

“Perhaps re-photography is not the right word to use for describing your work. I can understand you not wanting to “follow” Bruce Davidson since although it might be a learning experience, it could easily result in something second hand.”

In the end, I do not make it to the exhibition and OCA day as the cost of my train fare has more than doubled but am grateful for Tanya Ahmed in responding to my comments.

For her books see …