A visit to Hestercombe House which is not far from where I live.

I arrive earlier enough to see the exhibition briefly. This is being held in rooms on the first floor of the main house that overlooks the gardens created by Jekyll and Lutyens. My first impression is that these are not the kind of photographs one expects to see in gardening magazines although taste is developing for a more oblique aesthetic approach in photography even in more popular publications. I keep an open mind on the work I see not wishing to get too involved with my own interest in the work partly because I do not have much time and also because the exhibiting artists themselves are going to speak. Is there going to be an emphasis on the “picturesque”?

There is an introductory talk by the curator of the Hestercombe gallery, Tim Martin, which lasts a few minutes. Kate Best who curated the show is also present.

Helen Sear is the first to talk. Discuses Inside the View, a body of her work that draws from the Northern School. Images enmeshed via a computer. The back of a head appears on a woodland scene; neither of the two images dominates or is fully visible. Slows down the viewing process. The image took about a month to make. A series of images like this! The viewer is standing behind the viewer in the photograph almost looking over their shoulder. These were made at about 24 by 36 cm yet later made meter square images. Larger images enabled viewer to see the texture more clearly and importantly lines within the image. Enveloped these images with different textures and designs as well as compositions. Flowers feature.
Shows more of her work from later series. Image of flowers picked from a field near her home in Wales. Some more formal flower photographs to present them as unseen wild plants that had been brought into a domestic interior. Used crumpled up paper; creates a background texture that runs through the image. “Pastoral Monuments” was the title of the series. Large poster sized prints. Black and White photographs of sunflowers as well as colour ones; worked at night with a torch. Prints made then paper is crumpled then flattened then rephotographed.
More humorous images such as those of Wild Carrot which is an Umbillifer with large white flowers. Amazing structures that Sear has then rearranged in different ways. Formally posed with unicolour backgrounds.
Images taken from the Internet with tree surgeons in that have since been removed in Photoshop and the space in which the tree surgeon was working has been replaced with regenerated growth.
Idea of blocking the view in her work. Finishes by showing video or trying to as Sear does not know PowerPoint !! Nor it seems does anyone else so after a few minutes she gives up trying to show what was meant to be her finale.
What makes her crumple images? She is interested in the materiality of the photograph, an objective view of the art object. Creating a dialogue between the viewer and the image rather than creating a situation where the viewer is in a fixed position and hence more likely to be a consumer. Photographs women rather than men; finds them more interesting, identifies them as well as challenging the long tradition of male landscape photography.

Mark Edwards lives 4 miles south of Norwich and teaches in Suffolk at the university. Shows an image of the Hay Wain by John Constable which is an imaginative romantic even picturesque albeit working landscape. If there had been Pylons there, Constable would have painted them! Yet his work is chocolate boxey, nostalgic; Edwards collects Constable kitsch such as tea towels. Edwards is more interested in the drawings of Constable. One can be guided around Constable country yet what made him choose such places? Pencil on paper with detail. Edwards is influenced by the writings of Ronald Blythe whom he knows personally; Blythe writes about the landscape in a Constable like fashion and knew Constable’s great grandson. Another writer referred to is John Clare. Blythe lives in Constable country in an area that Constable also inhabited. W.G.Sewald is another author Edwards has met and talked with; Sewald’s book The Rings of Sand has been an influence. Edwards has spent time retracing steps of artists and writers. George Shaw is another painter he is attracted to. Early memories of landscape from when collecting firewood as a child with his grandfather yet Edwards himself comes from a working class background and grew up on an estate. When photographing uses an 8 by 10 camera because of the long winded process and likes to photograph within easy reach of his home (a two miles radius in fact) Shows a picture of himself at the top of a ladder. Can take two hours to make a photograph! A.ot of time between seeing a photograph and actually making it. Sees references in his work to Constable.
Landscapes and Vanitas! Does not tend to make bodies of work. More PowerPoint hassles prevent Edwards showing work. Another example of the rareIfied nature of this kind of artwork. Photograph of someone’s garden and the arrangement in it. Made from the street. Another photograph exhibited as Fallen Roses in the V&A though late found out there were not in fact roses!
Might Constable have been a photographer if he had been around today!? Quite likely. 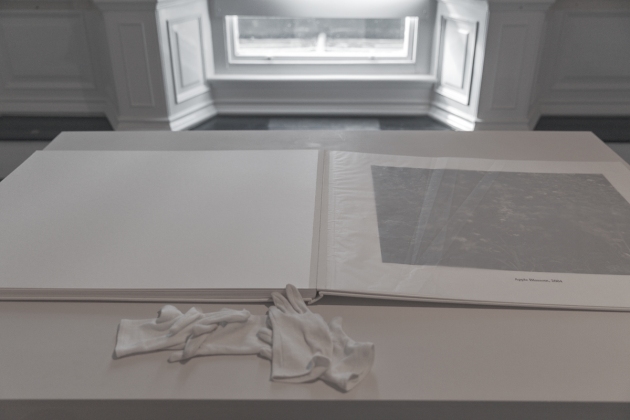 large format book of prints; an exhibit by Mark Edwards

Part of Edwards’ exhibition is a large format art book which is laid out on a table. Tracing paper sits between the images and text has been placed on this. It is an interesting piece that one is invited to engage with.

Sarah Jones seems to have a more abstract approach. Her first image is called Blue Studio and is a square image of different blue tones. Monotone in effect. About use of the colour blue such as Lapis Lazuli which was crushed and used in art. The visible and the invisible in one image. Did an MA in Fine Art at Goldsmiths. Concerns with the translation of the image by the camera and the shortcomings it has. The camera as a third person in the room. The spectator looking at and being looked upon etc Photographs in urban spaces such as parks and gardens.
Photographs of women in garden spaces. Works with a large analogue camera. Uses studio lights outside so a blurring between the inside and outside. Photography is the poor man’s cousin of painting!? Significance of depth within an image! Diptychs of garden space with a woman in and with no one in. Theme of long hair in images. Relating to Dutch painting particularly landscape. Plant taking over garden in London.
Blurring in photography of what has actually been there and what has been taken from a scene.
Photographs of interior domestic spaces as well as garden spaces. Using lights to make images win black backgrounds as if taken at night. Reverie and the nature of black. Cubist expression of objects in the world; concepts of different viewpoints. Snaps and references from studio wall.
Failure of photography to describe! “Everything we see hides something we don’t see … Conflict between visible and invisible” says Magritte. Jones also references portraiture in relation to her garden photography. Inky blackness of backgrounds!
Interested by stereo photography. Suggestion of duality, a split between the real and unreal. Brian Dillon a writer is referenced. Robert Hooke and his studies of nature through the microscope. Photograph is a moment frozen and infinitely stretched out.
Jones is certainly a very thoughtful photographer. Not always easy to follow what she is saying; needs more time perhaps or me to stop taking notes. I like the imagery though it is very involved.
Jones shows images from a film she saw as a child in the TV called The singing winging tree.
A volume about her has been published in 2013 by Violette Editions.

the exhibition is upstairs

There is a break for tea and another chance to see the exhibition. Having been told what the photographs are about, I find the experience of being a viewer more conditioned. One now knows what the work is about or meant to be about and hence less able to draw one’s own conclusions. Do I like or dislike this work!? It does not evoke strong reactions although I am struck by the originality of the work by the women!

detail from a Helen Sear photograph … I want to say painting!

The garden is an interiorised landscape.

When we reconvene, Helen Sear shows her movie. It is a silent black and white video of tits, mostly Coal Tits yet there are also Blue Tits, which shows the birds landing on what appears to be a brick but is in fact made from bird seed and it therefore slowly consumed. The video lasts about 7 minutes.

There is now a group discussion with the exhibiting artists and the curator, Kate   who starts it by asking questions. Helen Sear asks whether photography and gardening are acts with a similar purpose of scrutiny and collecting. Relationship between camera and things that are placed!
Sear found it extraordinary photographing a field over the course of a year. Realised she ought not to be picking the wild flowers though she later photographed them and made this public.
Use of photography for recording and discovery yet this approach can be extended. More positive than killing wildlife and then putting it into boxes though a process with a similar result.
Influence of archives but also media in general such as cinema as well as painting on our conception of photography.
Edwards likes the record photographs from the 19’th Century; full of wonder.

There is some discussion of Jekyll’s photographs and the way they are observations of the world. I find them well made for the era in which she was working; there is tonal range although shadows tend to be clouded as a result of largely unavoidable contrast.
The relationship between landscape and sexual experience! Melancholy inherent in photography owing to the death of the moment detected within it.
Edwards found that Buddhists understood what he was doing … slowing down to capture the moment! Going under the cloth to make the image and entering another world. Human dimension to landscape is evident within the garden. Some pictures are obvious, others require time to perceive. Looking at other people’s gardens from trains; elevated perspective! Trains are a nice way to see the landscape.
Gertrude Jekyll’s 19’th century garden photographs form the basis of this exhibition. They are now stored in California; her negatives have been lost. Most are of her own garden; an ongoing contemplative approach. Photography’s ability to record plants and flowers a reason for the development of photography; an early but not exclusive view. A lot of botanists also used photography yet there was already a link between botany and painting. Goethe and Durer, Dutch still lives! This link between botany and photography set to continue. Cultivated nature.
Exhibition reasserts Gertrude Jekyll in the history of photography. Which of her photographs are the most likeable?