Entrance to Cardiff railway station on a November morning

On a wet and rather windy morning in November 2919, I find myself on the steps of The Museum of Wales to see what promises to be an impressive show if nothing more. Sander is the only one I have not seen exhibited before yet his work is well known with one of his images of young farmers dressed up for a night out being the subject of a John Berger essay.(see HERE)

The OCA tutor shows up late and we tire of waiting on the steps preferring the warmth of the cafe inside! Matt sets us a small project to choose one or more works from each of the three exhibitions and put them together as a curated piece. 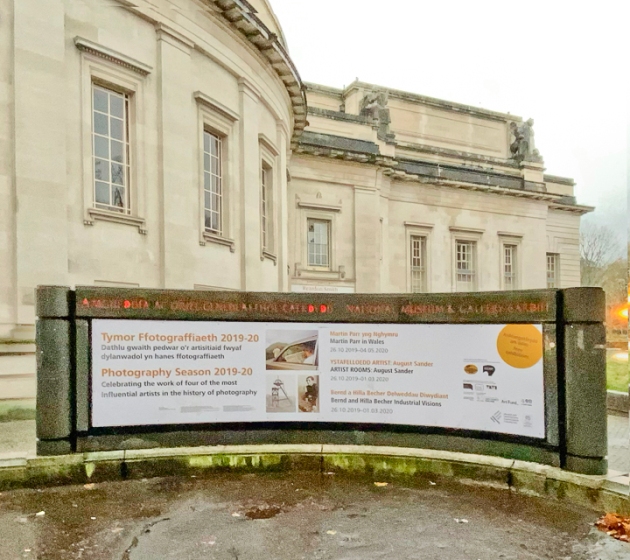 Before this, Bronwen, curator of photography at the museum, talks to us. She works alongside exhibiting artists and is responsible for the exhibitions. 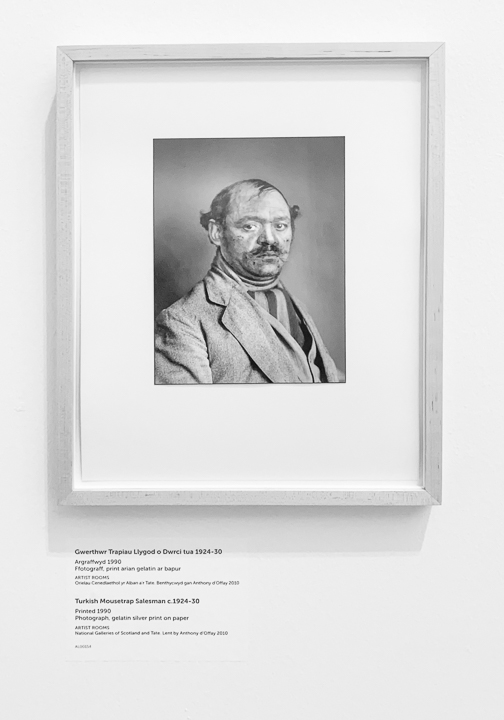 portrait by Sander of a mousetrap salesman

Sander, pronounced Xander, dedicated himself to developing a portrait of the nation largely during the first half of the twentieth century. Influenced Bechers. Made a portfolio of archetypes, fundamental roles from early twentieth century depicted both industrial and rural. Methodical approach. Beautiful portraits as well as ambitious survey. Controversial approach resulting in attacks from National Socialists.

OCA tutor Matt wonders about Sander’s private life and social status. Voyeurism? Class from a neutral point of view! Art destroyed by Nazis as considered degenerate, not contributing to idealism of nation.

Were the people Sander photographed really what he said they were?

The Bechers created a different kind of typology. The typological approach might also link with Martin Parr; he is also looking at different social classes like Zander.

Chronological timeline to exhibition of work helps to give the exhibition some uniformity.

Bronwen has been working on the Becher exhibition for 3 years (original idea for all 3 exhibitions) Bernd and Hilla’s son is now managing their archive. Some work on show here not exhibited before.

looking at work by the Bechers

The Bechers came over to Wales in the mid-60’s to photograph industrial structures on an Arts Council grant. Travelled in a camper van photographing everything they could of relevance. First time this work is being seen in Wales. Hilla had been interested in such an exhibition of their work.

Bechers ignoring people photography!!? Did not engage with social side of industry. Camaderie between miners not indicated. No mention of miner’s strike or the Aberfan disaster. There is a film about the Aberfan disaster called Attraction of Onlookers by Shimon Attie. which was on show at The National Museum of Cardiff.

Work on show from all over the world but landscapes all Welsh. Hilla selected the typologies for this exhibition but had passed away by the time landscapes were added. 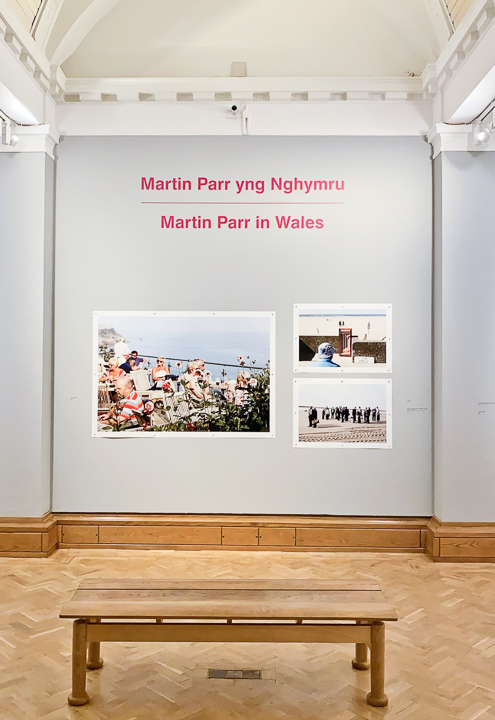 Martin Parr lives nearby in Bristol and owns a flat in Tenby hence a link with Wales. Lot of work on show was commissioned. British society. Criticised for documentation of classes yet warmth and fondness in his work. More playful less uniform approach. Prints all printed for this exhibition and will be destroyed afterwards to protect his integrity.

Criticism of his documentary approach. Coming up to strangers and photographing them without permission.

Laughing at his characters or laughing with them!? There is something very human in his approach.

My response to Matt’s assignment is to focus on the common link between these three, in many ways diverse exhibitions, which arise out of a need to compartmentalise the world, to create typologies which may say more about the observer than the observed. However, a grouping of objects does help to differentiate between them; what appears initially to be similar is shown to be very varied. My paper ran thus …

On the face of it, these three exhibitions have little in common. Photographers whose lives overlap but who do not share much in common. One might describe them as coming from different eras yet there are similarities such as Modernist and German although this would not include not Parr who might be described as British and post-modern.

The common theme running through the exhibition is one of typology, of making groups of images and hence in a sense compartmentalising the subjects even stereotyping them. A typical photographic approach.

Yet paradoxically, this helps to bring the individuality of the subjects to the fore. When you see the subjects beside each other , one notices the differences.

Matt suggested a number of sources …

The Ragged trousered philanthropists by Robert Tressel (fiction based on truth)

Not taking photographs at face level

Suggestion that Parr is putting people down or looking down on others; degrading others.

Story of Parr meeting with OCA when he offered to sign his zines for us!

Calling his foundation Martin Parr after himself !!?

All exhibitions looking at society !? Thinks Paddy, a student. She has a number of ideas another being about class, hierarchy, equality etc

How do these establish equality!??

After seeing the exhibitions at The Museum of Wales, we walk for awhile to Ffotogallery which has now opened in an old church in Fanny Street. There is an exhibition on here called The place I call home which consists of work by a number of photographers about Arabian locations. Some have a more imaginative approach than others and I am struck by a video piece in which a strangely clad human figure draws a house shaped machine across a sand dune landscape in which water also features. Other work is more formal with environmental portraits featuring. The exhibition is British Council sponsored and comes with a free catalogue; it gives a picture of the Arab world beyond that coloured by the dominance of Islam. Some of the imagery is of Arabs who have settled in the UK.