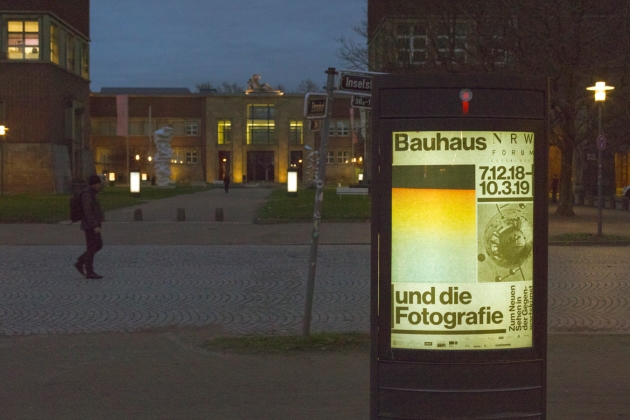 The Art Palace in Düsseldorf contains a number of facilities; next door and to the south, is the Cultural Centre where the Bauhaus and Photography exhibition is being held. One enters and there is a restaurant-café in front while to either side is the exhibition. On the right is a cashier and book shop; of course, I purchase the catalogue as well as a silk bag with Hokusai’s The Great Wave 🌊 on it but not until after seeing the exhibition. 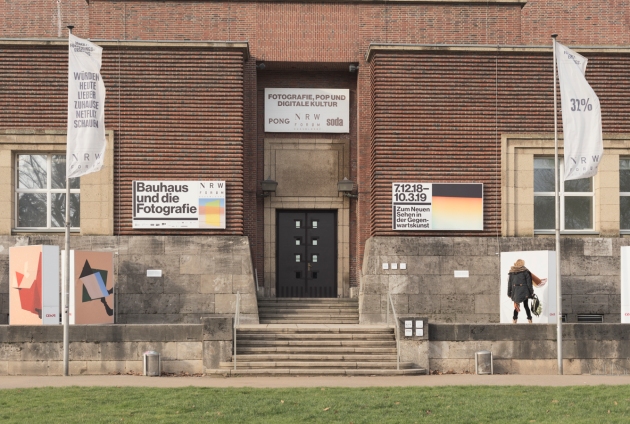 To the right is a large hall with work and lots of white wall space while to the left is a longer room partitioned to create three rooms. At the far end of this is another room that contains a virtual reality set up in which one wears a pair of goggles that allow one to see the Film und Photo exhibition from the Bauhaus era created by Lazlo Moholy-Nagy in 1929. 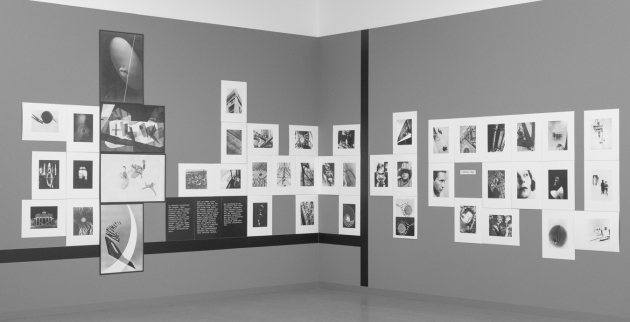 In the first room, there is another Lazlo Moholy-Nagy exhibit which is in a corner. It is good to see this work as well as the contemporary photography of Vivienne Sassen. My first look at the exhibition takes about half an hour during which I find time to read the captions that introduce the bodies of work. Brief but not lingering examination of the art works is possible.

I like an exhibition that is not too big or demanding. 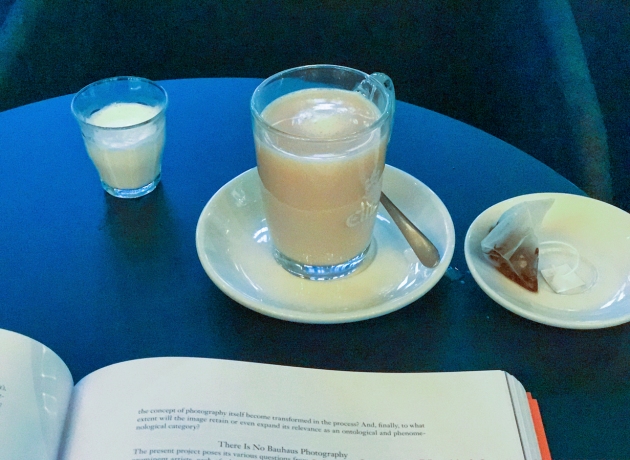 In the café, I start to read the catalogue. In his introduction, Kris Scholz talks about two approaches to photography, that of New Objectivity which sought to make accurate and objective representations while New Vision “strove to broaden people’s consciousness and open it up to a new, socialist society.”Some photographers saw the chance to experiment with a different way of using the camera as in point of view and adopting extreme positions such as from the top of buildings.

Moholy-Nagy at the Bauhaus was interested in a pioneering attitude and asked where photography might be heading. He helped liberate “photography from its commitment to the pure reproduction of reality” and wrote “photography is the first means of giving tangible shape to light … in a … almost abstract form.” Moholy-Nagy questioned the effects of capitalism but was fascinated by technology in which he saw great potential.

Moholy-Nagy was succeeded in 1929 by Walter Peterhans who was a trained photographer. He advocated a more rigorous and objective approach regarding Moholy-Nagy’s approach as lacking craftsmanship and encouraging academic dilettantism.

The Bauhaus encouraged not the lone artist in his garret rather one who was involved with the world of industry in which the artist is now required.

This exhibition is more concerned with the visionary aspect of photography than the purely technical.

black and white work by Esteban

Esteban (b.1959) presents two sets of digital photo collages, one in black and white mostly and the other in colour, designed as visual textures; critique of contemporary civilisation is suggested by his work. The intricacies of mechanics are suggested in his imagery that recalls Cubist work. The non-colour work is fascinating and the colour quite appealing.

Seufert’s towers recalls the twin towers. Their strong geometry emphasised by colour makes them look like leaning towers. There is no direct reference to the twin towers and what might be suggested here is transcendence of that event.

The corner dedicated to Moholy-Nagy and his wife is intriguing. This is from the Film und Foto exhibition of Stuttgart 1929 that moved to Berlin where changes seen here were made. It is a 1:1 restaging! The imaginative placing of the works is not easy to rationalise which is of course partly the point! A group of prints by L.Moholy-Nagy (these prints like the others here are newll made) are grouped together and have a similar appeal yet the selection feels different. There is a contemplative experience in this corner.

Forms and Records by Doug Fogelson (b.1970) are smaller works than Estrafan’s yet mirror his approach. The use of light boxes here helps to illuminate the work.

Douglas Gordon (b.1966) is a Scottish Turner Prize winner. His one black and white image here reproduced in different contexts shows a section of his head that includes one eye.

In a large studio, a room I missed first time around, are two large video screens and a smaller one which show an elephant rolling around and walking, enjoying the space it is in. This is a wonderful video that brings out the intrinsic beauty of the animal. 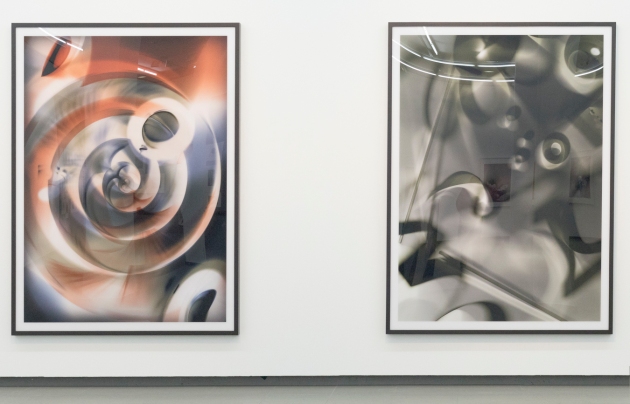 I saw an exhibition of Ruff’s (b.1958) work about a year ago. The two pieces here represent some of his more imaginative and abstract work. Swirling shapes in both colour and monochrome with a few lines.

Vivienne Sassen (b.1972) was introduced to me as a fashion photographer; her work here is about art. Her use of strong transparent colour and detailed yet largely uniform landscapes is intriguing. Her work Umbra from 2015 is referenced. Her “arrangements always retain a slight contradictoriness. Moments of realism and abstraction are equally effective in them.” Green,Red and Yellow views are presented as large prints while smaller ones from the Umbra series (2015) are in a vitrine. I like this work and it’s commentary on the shadow but cannot grasp it!

Dominique Teufen (b.1975) has created a selfie point. A large canvas print of a mountainscape with glacier (actually just a “whimsically composed mountain of paper”) is draped over a wall and allows one to stand in front at a marked spot to take one’s selfie! She has other prints of architectural models. 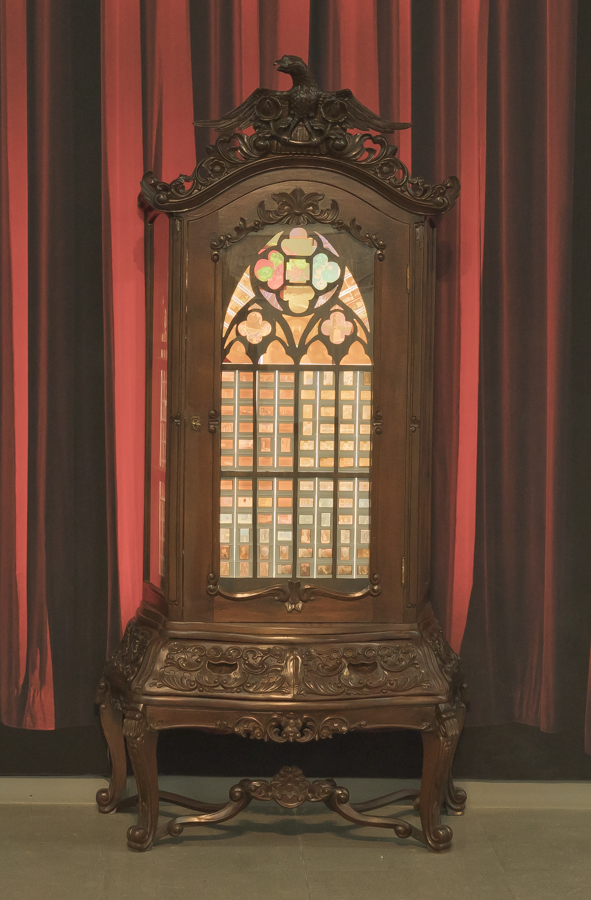 Kris Schulz, a teacher, who wrote the introduction to the catalogue is also an exhibitor. I like his ornate  case of wood and glass which with lighting inside, is used to illuminate a collection of transparencies. Schulz also exhibits a series of large photographs of textures.

Work by Wolfgang Tillmans on show here I have seen before at Photo London 2016. His Brexit call to remain is intelligently expressed.

The 1929 Film und Photo is given prominence here. According to Kai-Uwe Hemken “the young Bauhaus students followed the avant-garde pursuit of innovation, topicality, and progress as the guiding principles of modernity …” There was no one photographic approach. The medium encouraged by smaller hand held cameras became more independent and grew away from the confines of painting.

An important figure was Lazlo Moholy-Nagy who famously wrote, “The illiterate of the future will be the person ignorant of the use of the camera as well as the pen.”

The chance to see the 1929 Bauhaus photography exhibition “Film und Photo” held in Stuttgart via a virtual reality set up is truly remarkable. By wearing goggles and using a handheld device, one can walk around the exhibition although physically one need not walk anywhere. The photographs are not captioned although there are brief areas of text (in German) which presumably explain the different sections.

It is interesting to see this collection of photographs. When Walter Benjamin wrote A Little History of Photography, these are the kind of images he was referencing; in fact, he probably saw this exhibition and may even been inspired by it to write about photography.

I recognise some of the photography! There are the plant shapes of Karl Blossfeldt as well as portraits by Nadar and I think I recognise work by Scottish photographers Hill and Adamson. It feels unreal (it is) to be transported back to an experience of photography from 90 years ago.

What is the future of photography?

“What is the future of photography?” is the mantra of this exhibition; the text is written on the wall (literally) and the question still seems relevant today.

Antje Hanebeck (b.1968) presents large black and white photographs, high contrast, of modern architecture. The detail is soft. Some mirror the photographs Moholy-Nagy took looking down from the top of a tower.

The work of Daniel T Braun is abstract; one cannot make out exactly what he is photographing.

Work by Onerato and Krebs is likewise abstract yet there is more sense of form here. Three are in colour, two in black and white. There is a sense of motion here , of energy released and allowed to go wild. Fusion!

To fly to a European city to see an exhibition might seem obsessive but it was worth it. Perhaps there will be other exhibitions that focus on Bauhaus photography in this centenary year (2019) yet often photography is side-lined in Bauhaus exhibitions. Here, is the chance to engage with it, to understand the genius of Moholy-Nagy, and view a time when photography was in many ways an unexplored territory.

One thought on “Bauhaus and Photography”