The V&A gallery in which the exhibition is held

The V&A Museum in Kensington have been collecting photographs of trees since the early days of photography; their natural wonder and changeable nature provide a lure for the camera.

“Trees have long been a source of inspiration for artists. This display explores the diverse representation of trees in photography – as botanical subjects and poetic symbols, in the context of the natural and human worlds.” (from the V&A website)

The first photograph seen on entering is by the Japanese photographer, Tokihiro Sato, and is a long exposure made in black and white with stars in created by using a mirror. In this context, the beech trees signify ancient origins of the Japanese people representing both masculine strength and female sensitivity.

A brief walk around the exhibition and one notices many excellent photographs from known photographers of the established canon yet one is missing; a photograph of an oak tree by Fox Talbot, iconic in the subject it portrays and iconic as a photograph. I have a copy in my bedroom and the image is well known appearing for instance on the cover of G.Batchen’s book about Fox Talbot.

There seem to be an even mixture of colour and black and white photographs with little attempt to place them in chronological order.

A series of three photographs that interest me is called Dundrum Grounds dated 1857 to 1864; these are by  Lady Clementina Hawarden who lived in Ireland between 1822 and 1865 and were made at the family home in Tipperary, Ireland. They are albumen prints which were later given by Lady Clementina Tottenham in 1939. At one time, the family were among the wealthiest of British landowners. 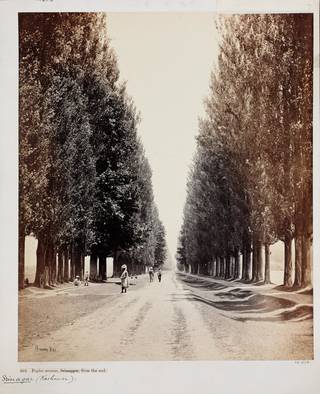 Next to this are a group of four albumen prints by Samuel Bourne (1834 to 1912) who travelled in Asia; these photographs made in 1864 then printed in 1867 are from Srinagar In Kashmir, from what is now Pakistan and Singapore. Like many of these old prints they emphasise both detail and tonal width.

On the back wall facing one on entry is an interesting diptych of a calotype by Benjamin Brecknell Turner called Head of a Lake (dated 1852 to 1854); the albumen print and calotype of the same photograph are presented together providing an insight into one of the first photographic processes. Essentially this is a reuniting of the  paper negative and the print made from it.

These early photographs so beautifully presented are a reminder of what the early twentieth century German critic Walter Benjamin refers to as a time when photographs possessed an aura.

Other examples include albumen prints of beech and elm trees from a series called An Anatomy of Foliage by Edward Fox which were made about 1865, one of the forest of Fontainebleau (1851 printed about 1855) by Gustave Le Gray who was working with a group of painters from the Barbizon School, an ancient oak photographed in about 1854 by William, Second Earl of Craven as well as a a tree through an open window made by Roger Fenton at Oxford College in about 1859.

These are all impressive images in their own light but chosen from the collections of well known photographers who are part of an established canon rather than because they are great photographs of trees. Edward Steichen is also featured with a photograph called The Pool (1899), a platinum print in which the photographer plays with dark subtle tones. 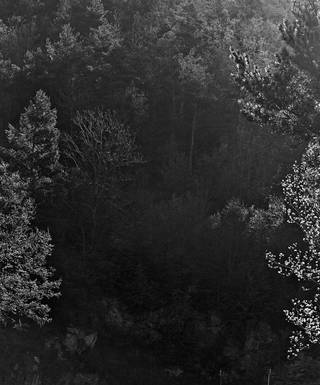 A much more recent photograph by Awoiska van Dee Molen from 2011 printed 2014 as a collotype, is another image that explores darker tones; the original was made in the Canary Islands.

I plan to visit this display again if there is time; it is surprising how much one room can hold.