portrait by Frenet c.1855 – the posing here is unlike anything found in more commercial galleries

The next day, I saw the exhibition again, this time with fellow students from the Open College of the Arts and accompanied by tutor Rob Broomfield who acted as catalyst for our observations, encouraging us to look with a critical eye – what are the curators up to !?
The very fact that the photographs are being presented in a museum, framed and mounted, with soft lighting is encouraging a predictable response. Might there not be a statement being made about their cultural significance? One might question this presentation! Is this really what defines these objects or is it just a certain point of view being put across by the curators.
As viewers, we do not have to criticise the works on show in terms of their quality, the fact that a group of experts has gathered to select them, more or less affirms their excellence but one can question the labels that a certain group of people are attaching. They are likely to resonate differently according to the individual observing.
For instance, I am struck by two photos that show the China and Glass collections owned by Talbot and photographed by him. He wrote, “… however complicated the arrangement – the Camera depicts them all at once” while “Glass articles impress the sensitive paper with a very peculiar touch, which is quite different from that of the China …” (From The Pencil of Nature 1844)
Soft or hard? It depends on the body of work! The harder appeals to the commercial world where results are often predetermined while in art based photography in which the viewer may have expectations but is not laying down the rules, a more rounded softer approach is possible. As a photographer making prints, the result might depend on client expectations or be a response to the body of work being presented. Tutor Rob Broomfield mentions that during the 1970’s there was something of a vogue for soft focus prints; I can not help but wonder if these might have been in part a response to technological limitations at a time when colour photography was only just begining to emerge.
For me, this exhibition is about the dialectic that exists in photography between science and art, between the delineation of subjects and their aesthetic.
For the curators, the exhibition seems to be about the value of these early prints both as art objects and historical artefacts. Obviously, they are aware of other implications in this work such as the one that struck me concerning a dialectic that is still at work in photography.
“Beauty is in the eye of the beholder!” Yet I think most people would find these images beautiful even if some of the subjects are banal.
Even early photographers responding to composition and traditional motifs such as The Golden Mean. Not so contrived as more concerned with the technology? Rob questions this!
The introduction of glass plate negatives changed the look if photographs even though the prints were still silver and salt based.
Was Impressionism a response to the apparent realism of photography? Apparently so as was it’s focus on the everyday with framing that on occasion would only reveal part rather than the whole of an object.
This exhibition evokes a more innocent era in which people were not so generally nervous about photography or aware of the many ways it could be used to bear a false rather than a true testament.
Looking at Hill and Adamson’s photograph of two girls called The Gowan, one would expect a photographer these days to find the photograph extremely low in contrast and in need of manipulation via a Curve!? This image is lighter than others probably as a result of wanting to retain shadow detail; in those days with the techniques of the time, contrast was much more difficult to apply. Nowadays it is much easier and so overdone.
Portrait of a Man made by Fenton in about 1854, shows a rather robust posture which makes the individual look like he might be disabled. This is almost certainly a result of the long exposure which required the pose to be held motionless for a considerable period.
Frenet’s posed portraits are however “a long way from the posed studio portrait.”
Similar motifs such as the after the flood photograph 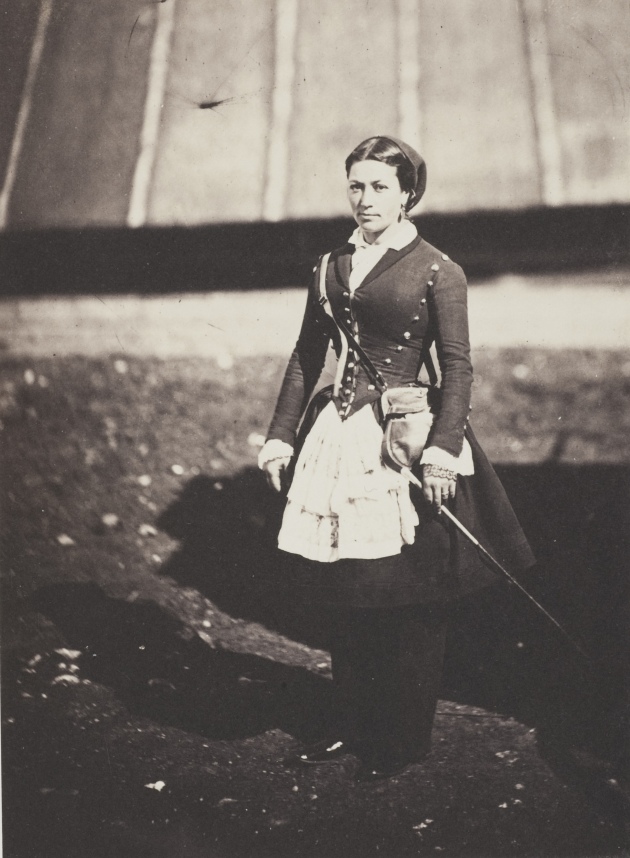 After the exhibition, we meet in the cafe, a group of about 10, to discuss the exhibition and try and determine what it is actually about.
We discuss the prints which are of everyday life with their own soft aesthetic. Wilson mentions their rich velvety look and tonal range which has been lost.
Luxurious! The effect of the prints is somewhat rarified. That they are black and white is a misconception of this work.
The connoisseur approach which looks at these photographs as art objects yet they are also a historical record. This method has been  “improved” upon !? Possible to see prints from a historical perspective or solely as art objects even though this might be the obvious response. Were not photographers of this era “upper class” and this resulted in photographswith a certain way of looking at the world. A privileged view. One can also view this exhibition from a connoisseurship perspective!
Archaeological approach in work of Salzmann and Linaeus Tripe among others.
Two ways of seeing the exhibition, as art and as document. One might see the exhibition in terms of technological development though the curators give us little understanding of this. There is not much if any mention of the significance of Talbot’s technique by which a captured image could be preserved and then duplicated. No mention or example of the “rival” Daguerrotype!
About British photography rather than French photography except French photography did use this British invention; we are in Tate Britain!
This show does not really challenge anything except perhaps our knowledge of what early photographic prints were like!? An example of early photography with the selection being made by curators and the owner of the archive. Perhaps exhibition does challenge our misconception of early photography as being composed of prints that do not have aesthetic value, being the products of an archaic process that needed improving. These photographs are perfectly acceptable representations of reality.
This exhibition seems to fly in the face of Walter Benjamin and John Berger who said the photograph has no aura since it can be reproduced infinitely; here, the photographs seem possessed of much aura but is it just that created by their museum and critics or do the images themselves have something remarkable about them? One would need to see the photographs free of all their trappings but these are as much in the mind as in physical objects hence not easy to separate the fiction around these photographs from the reality.
Alternative processes can become over-indulgent, a leisurely pursuit rather than an objective view. Gratuitous perhaps! However, understanding the process of alternative technologies (using film is one of them now!) might be helpful in developing one’s knowledge of photography.
There are examples of lost photographic processes being revived such as with platinum printing, an old process of photography that has not been surpassed and hence is being used to show an exhibition of Salgado’s Genesis.
Digital technology has roared ahead but can it produce work of the quality seen in the Silver and Salt exhibition? Digital has so much further to go; it is the Stone Age for digital at present. Camera sensors that can accommodate a much wider dynamic range is one possible area of development.
This exhibition a reminder perhaps that progress does not always produce better quality objects rather it tends to be more pragmatic in it’s approach.
This exhibition is about aesthetically produced prints that might be said to have aura either real or artificially produced by the art environment in which they circulate; however, unlike the early days of photography when these photographs were being made, photography is no longer concerned with the aesthetics of the print as much work will never be printed but distributed digitally or in reproduced in books where the printing process is not so easy to control. What Benjamin and Berger say about the photograph not having an aura whereas the painting does, is more an ideological statement than a factual one. However, the aura of a photograph hardly features in discussions of photography these days since it is no longer of much importance.
The Open College of the Arts itself has moved away from practical considerations of photography to more cultural ones.
It has been a good discussion with fellow students and tutors and I come away feeling that I have a better understanding of what this exhibition is actually about rather than merely what the curators want us to see.
Perhaps it is a rediscovery of the wonder that photography can bring that makes this such a rewarding exhibition!