MUSEE MAGRITTE : a look at the art and thought of Rene Magritte

Finding myself in Bruxelles for a week-end, I decided to visit the museum set up in 2009 tthat shows the work of the artist Rene Magritte; on the whole, I am more interested in photography rather than painting but the approach of Magritte to his work is fascinating and does seem relevant to myself as a photographer. The photograph can be considered a surrealist object and it is no coincidence that Magritte was himself interested in photography.

As we approach the Musee Magritte, Palyang mentions that Magritte worked a lot with contrasts; I wonder what she means as Magritte was not from the Bauhaus school in which a series of “contrasts” played an important role. I also do not associate contrast with his work. She mentioned day and night as being one of the contrasts. Of course, one can not ignore the concept of contrast as so much art draws on this with the Bauhaus school recognising this fact. It is perhaps in the meanings of his images that Magritte plays with contrast.

It was not surprising to learn that photography was prevented in the museum but to be told that I was not even allowed to make notes was discomforting; the Magritte museum website also contains text that can not be copied and pasted unless one does a screen grab. Does this shock have any relation to the surprise that many of Magritte’s paintings evoke? I was trying to see positively.

Magritte “realised that, ultimately, aesthetics are merely accessory to the artwork: the idea is the only thing that counts.” Quote from the museum website – http://www.musee-magritte-museum.be/Typo3/index.php?id=89&L=0. Also “Art is first and foremost a way of knowing man and the world, and the painter has a role to play in revealing what the world is, or rather the mystery that it contains.” 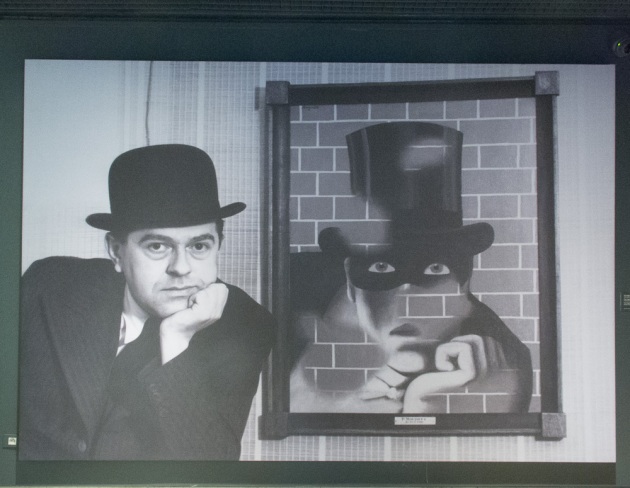 It may not be correct to call Magritte a surrealist (he also experimented with Cubism and the naive) but it is undeniable that he was greatly influenced by the Surrealist group as a younger artist and writes of surrealism, “Surrealism is immediate knowledge of the real: the real is absolute, alien to all the different ways of interpreting it.”

Much of the material being shown by the museum is about the personal life of Magritte. There are many photographs of him with his friends and he seems to be detached from the moody torture driven artist who seems so popular in western art; Van Gogh who cut off his ear and eventually committed suicide is a classic example, Lucien Freud who got into physical fights with people on the street a later one perhaps.

Magritte was not just a highly skilled painter (perhaps only Dali and Ernst were his superiors in craftsmanship), he saw the painting in itself as a dead end; he was also a poet and expressed his insights through painting. This is where I find a bond with Magritte since the photograph can also be limiting and when one has finally reached a point where one can make a technically proficient photograph (this is not as simple as one might assume) one might find one reaches a point where one wants the photograph to say something more than it usually does. The idea that a photograph like a painting, can make a statement, gives the photograph much greater potential as an art object and possibly liberates it’s creator from the “tyranny” of the image.

At one time, Magritte included words within his paintings not as a way to affirm their subject rather as a way to question their meaning and one of Magritte’s most well known paintings is of a pipe beside which is written in childlike script, “This is not a pipe!” Magritte reminds us that what we see represented is not actually the object portrayed; a blindingly obvious statement but one we tend not to be fully aware of. Magritte is using text to “introduce doubt, to question the link, which he considered arbitrary, between the naming of a thing and the thing itself: between image and language” Quote from the Musee Magritte – http://www.musee-magritte-museum.be/Typo3/index.php?id=89&L=0

Some of Magritte’s sayings are written on the wall of the museum in both french and dutch but not english. This is rather disappointing as his thought is obviously an important part of his work and lost on the many like myself, who do not know French and Dutch well enough to grasp Magritte’s meaning. Again I am struck by the secretive nature of the museum; Magritte was apparently initially weary of the museum and not in a hurry to give them access to his archive so perhaps he could see his work might be appropriated. In the first year, the Museum had over half a million visitors and with most paying several euros each, the museum must have netted a large income. They are starting an online research centre for the museum so perhaps all the profit gleaned from preventing easy access to a posthumous Magritte will reap rewards that will benefit everyone.

Certainly, for me, this visit to see the work of an artist who although highly skilled still felt the painting to be limited, has been worthwhile because it has presented a way to go beyond the image to the realm of the poetic just as Magritte did. I have always admired his work and now I can see why.

After the exhibition, we visit the shop where Magritte’s work has been reproduced in endless different media from mouse mats to fridge magnets. The full museum guide costs Euro 40 which is rather costly. Another book which contains 400 of his paintings does not have a price on it; I note the details and the publisher and look it up on the net where it is unavailable from the publisher and costs over £300 from Amazon. I need to visit the museum the next day and decide to check on the price; it is only 10 euros which is a good price for such a book. Apparently the museum has bought up all the copies but does at least sell it for a reasonable price; I might even try selling my copy on Amazon at a much reduced price such as £100 to see if I can make a healthy profit.

Apart from the 400 images in the book, The Portable Magritte (published http://www.loudion.be), contains an introductory essay by Robert Hughes. This contains a good description of the artist as “storyteller”; “Modern art was well supplied with myth-makers ..But it had few masters of the narrative impulse … Magritte was its chief fabulist. His images were stories first, formal paintings second, but the stories were not narratives … They were snapshots of the impossible, rendered in the dullest and most literal way, vignettes of language and reality locked in mutual cancellation. As a master of puzzle painting Magritte had no equal … ”

After describing some of Magritte’s paintings, Robert Hughes goes on to write about the deeper concerns of Magritte that “were with language itself, the way that meanings were frustrated by words or symbols.” The classic example of this was the pipe painting (described above) that was also presented as an apple.

In fact, one can say that “Magritte became one of the artists whose work became necessary to an understanding of modernist culture.”

Of the shock or surprise Magritte’s paintings often contain, Hughes writes “their trigger is thought itself!”